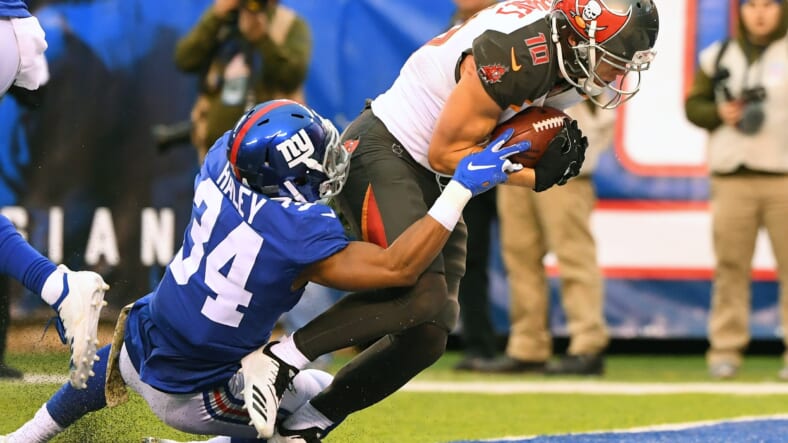 The New York Giants have won eight of their last twenty-six games. They’re not a good team and have a lot of holes to fill out on the roster. While specific skill positions are filled with quality players – running back and wide receiver – others are in need of support.

Here are three priorities for the New York Giants in 2019:

The Giants struck gold last offseason in the NFL draft with their second round selection. Left guard Will Hernandez has already shown he is a great player that will be a building block on the Giants’ offensive line for years to come. The Giants also signed left tackle Nate Solder to a record-breaking contract. These players improved the Giants’ offensive line tremendously. However, the Giants still need help on the right side of the line.

Right guard Jamon Brown was a solid pickup half way through the 2018 season. But his teammate to the right of him struggled all year. Right tackle Chad Wheeler has shown nothing that would indicate he is the Giants’ right tackle of the future. Chad Wheeler had a 47.1 Pro Football Focus grade in 2018, making him the 82nd ranked tackle. In order for the Giants offense to be better next season, they need to make an upgrade at right tackle.

The New York Giants’ secondary was a major disappointment in 2018.Â  Janoris JenkinsÂ was not the shutdown cornerback that he used to be, allowing 12.6 yards per reception, 96.6 passer rating, and 6 touchdowns in coverage this season. Second corner B.W. Webb was not much better. He was average, according to Pro Football Focus, earning a grade of 62.6.

Janoris Jenkins has had trade rumors surrounding him for about two years now, and it would not be surprising if general manager Dave Gettleman moved him this offseason. Gettleman likes to give younger players opportunities.

Undrafted rookie Grant Haley showed flashes this season. He could potentially be the Giants’ top corner in 2019 if he continues to develop. He earned an above average PFF grade of 69.3. Another young corner who will be part of the Giant’ future is supplemental draft pick Sam Beal. Beal tore his shoulder this season and did not play a game, but expect to see him play significant snaps next season.

Eli Manning is in his fifteenth season. Fans and reporters alike agree that his performance has declined in recent years. Eli was only able to throw for 21 touchdowns this season, despite having fantastic playmakers surrounding him. Pro Football Focus gave Eli a grade of 64.3 and ranked him as the 31st quarterback in the NFL in 2018. Despite this, Eli did throw for 4,299 yards and a 66% completion percentage.

Eli is still a good quarterback, but it is time for the Giants to start looking towards the future. With the quarterback having turned 38 earlier this week, it is evident his time in the NFL is almost up. The Giants need a plan at the position for when Manning is no longer there, and this offseason is a good time to put that plan into place.