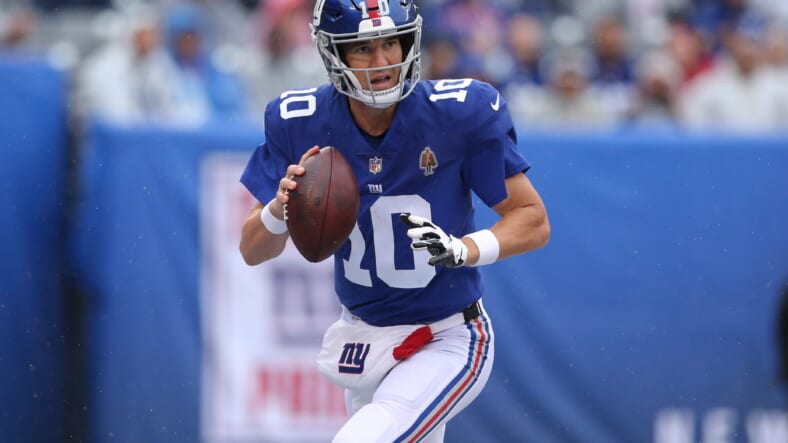 The New York Giants finished the 2018 NFL season a disappointing 5-11. On Wednesday morning, general manager Dave Gettleman addressed the media in his post-season press conference. Many of the questions for Gettleman were about quarterback Eli Manning.

Later that day, Eli Manning and head coach Pat Shurmur both participated in interviews on WFAN660. Shurmur’s, Manning’s, and Gettleman’s responses to questions regarding Manning left some fans confused.

Dave Gettleman was asked about his quarterback situation multiple times during his press conference. Some were lead to believe that the general manager is ready to move on from Manning, including former Giants linebacker Mark Herzlich.

When asked if he was committed to Eli Manning in 2019, Gettleman responded with this:

Hereâ€™s what Iâ€™m committed to do. Iâ€™m committed to making the best decision in the interest of the New York Football Giants. Thatâ€™s what Iâ€™m committed to do. Weâ€™re in the evaluation process. I know that you guys want answers now, but very frankly, I didnâ€™t come in yesterday. Iâ€™ve got to do what I do, which is get in my office and watch film. Weâ€™re going to meet this week with the coaches and get their evaluation. Weâ€™ll meet next week with pro personnel and get their evaluations and get their feelings on everything. Thatâ€™s our schedule, and I will be watching film for the next who knows how long until my eyes bleed. Thatâ€™s what I do. So, my commitment is to make this team the best team it can be and if that happens to have Eli playing quarterback, it does.

He later went on to say that “everything is on the table” for the Giants at the quarterback position.

A very noncommittal response from the general manager. It should also be noted that Manning and Gettleman had a lengthy, private conversation on Monday. According to Gettleman, Manning came to speak with him.

Pat Shurmur and Eli Manning both went to WFAN660 to be interviewed by Mike Francesca. The head coach was interviewed first. When asked about his quarterback, Shurmur was much more supportive of Manning than Gettleman was.

Shurmur said that he “appreciates the good in Eli.” He also said that he believes Eli “can still play” and can still “make the throws.” This makes it seem like Shurmur has already made his evaluation, unlike Gettleman. It is very peculiar to hear the general manager be so noncommittal, then hear the coach be so supportive and committed to the quarterback.

Shurmur and Gettleman’s evaluation does not mean much if the veteran quarterback decides not to come back next season. Surprisingly, some of Manning’s responses in his interview with Francesca seem to indicate that Manning is considering retirement.

To close the interview, Francesca asked Manning if this was the last we had seen of the quarterback’s professional career. Eli responded with an eyebrow-raising, “we will see.”

This quote seems to indicate that Eli is mulling retirement and has not decided wether or not he will play football next season. Manning said in the interview that he “wants” to play, but also that he to have “an open conversation” with Gettleman and his staff through this evaluation process.

Eli also reinforced his previous statements of wanting to play for one team. This could mean that the Giants have the ability to tell Eli he is not going to be a part of the team next season, ultimately sending him into retirement.

Giants fans want answers about their franchise hero. As Gettleman, Shurmur, and Manning continue their evaluation process, the fans will continue to listen eagerly to find out what is in store for this franchise in 2019.