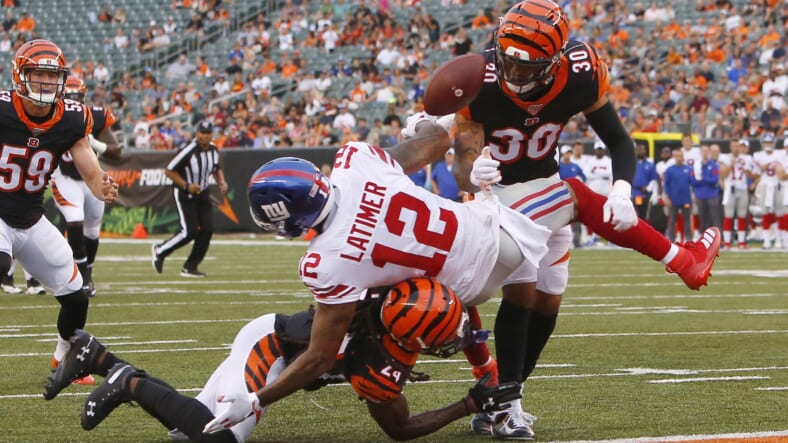 While Cody Latimer is the expected starter for the New York Giants at the number three wide receiver spot, he lost a bit of ground on Thursday night against the Cincinnati Bengals. As the consensus number one option due to Sterling Shepardâ€™s broken thumb and Golden Tateâ€™s concussion, he was the lead target for Eli Manning and the offense. He finished the game with one catch for 9-yards and two drops, one of them being in the end zone.

Cody Latimer has to bring that one in! Difference between 7 & 3 points! pic.twitter.com/PAJuu5ZDFR

Latimer has the speed and route-running ability to be a favorite option for Manning on the offense, but his performance on Thursday night was nothing short of abysmal.

He gave incumbent TJ Jones a good chance at climbing the ranks and giving him a run for his money. Luckily for Latimer, Jones did not record a reception against the Bengals, but he was missed on a long throw on the left side of the field by Alex Tanney. He created separation and had two defenders trailing him from behind.

The New York Giants must be impressed with TJ Jones:

In week one of the preseason against the New York Jets, Jones finished the night with six receptions for 72 yards and a score. One week later, Â he hauled in three receptions for 32 yards and a touchdown against the Chicago Bears, proving that he can be a consistent option and threat in the passing game. He worked as a Â wide-out and out of the slot, showing speed and agility from both positions.

Jones was overshadowed while playing in Detroit, behind Kenny Golladay and Golden Tate. He will have the opportunity to be an impact player for the Giants moving forward, as he has shined in limited reps this preseason.

Realistically, Jones will likely feature behind Shepard, Tate, and Latimer. He doesnâ€™t have the chemistry and experience with Manning that Cody does, which puts him at a disadvantage. However, if he continues to play the way he has and develops a relationship with Manning, he could overtake Latimer during the regular season.

His shiftiness in coverage and ability to make tough catches makes him a wild card on offense, and itâ€™s always good to have an unexpected talent make an impact.

â€œI think that the opportunity, when itâ€™s presented, you make it what you want it to,â€ Jones said. â€œIf you come in here (as) just a camp body, then thatâ€™s what you put out on film. You wonâ€™t believe you have a shot, so you wonâ€™t put your best foot forward. But if you come in with the mindset that Iâ€™m here to earn a spot, to earn a job whether itâ€™s here to put out good film or if I were let go for someone else to see good film, thatâ€™s on you. So, I came to make the best of the opportunity and to definitely not let the timing of it affect the way I approached it.â€