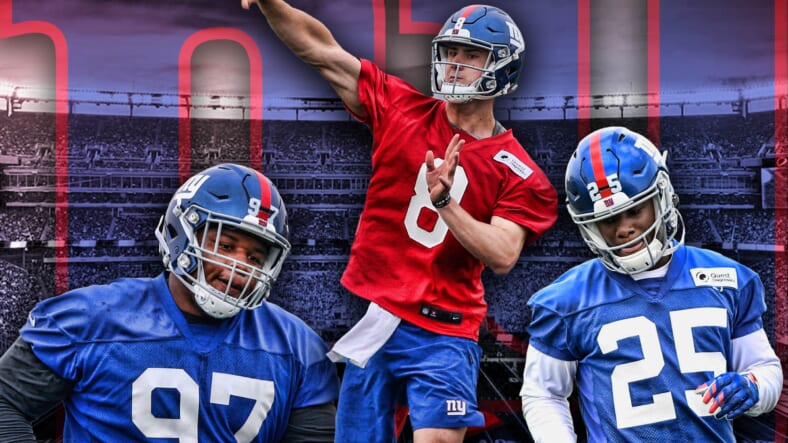 With the New York Giants training camp in full swing, it’s time to bring on the preseason games. Instead of the usual preseason schedule with the Giants taking on their cross rivals in their third game, this year the proclaimed “snoopy bowl” will be the opener. Here are some Giant things to watch for.

Daniel Jones has been one of the most polarizing draft picks to put on a New York Giants jersey in quite some time. So far throughout spring OTA’s and training camp, he’s checked all the boxes and combated draft night criticism with strong throws. However, this is the first real test. Live football action is a whole different animal than sporting a red pinny with a clean pocket every play.

In a preseason opener, the Giants would like to see if the rookie can stay composed and command the huddle. Last year the Giants expected Davis Webb to make a big leap heading into his second year but failed to stay calm and threw inaccurate fastballs. The new regime was quick to dismiss Webb and move on. This won’t be the case for Jones being a #6 overall pick. An efficient game would be another great step for the promising rookie.

Who will step up at WR?

When the Giants traded OBJ they resigned productive wideout Sterling Shepard to a 4-year extension and brought in elusive receiver Golden Tate to make up for Odell’s loss. However, everything that could have gone wrong so far has for Giant’s wide receivers. Corey Coleman tore his ACL day one of camp, Sterling Shepard had fractured his thumb, and Golden Tate is facing a 4 game suspension for violating the NFL’s performance-enhancing drug policy.

With three down the Giants are praying for a Victor Cruz type of emergence in the preseason. Returning receivers Russell Shepard (10), Cody Latimer (11), and Bennie Fowler (16) all had less than 20 receptions last season.

One player who has stood out in training camp is Daniel Jones favorite target, Alonzo Russell. Something to keep an eye on.

Where will QB Pressure come from?

The Giants have high expectations for second-year man Lorenzo Carter to fill the big shoes of Olivier Vernon. Carter only had 4 sacks in his rookie season and will likely make a jump. Coaches around camp have noticed a bulked up Carter who added 10-12 pounds of muscles this offseason (Giants.com). Alongside Carter is veteran Markus Golden and 3rd round draft pick, Oshane Ximines.

The Giants signed former Cardinal Markus Golden to a one-year prove-it deal. Back in 2016, Golden racked up 12.5 sacks on a Bettcher led defense (Sports Reference). Coming off knee surgery can he resemble anything of his former self?

Ximines was a division 3 standout from Old Dominion College. He has smooth moves to get to the QB. However, can he adjust to the faster speed of play in the NFL?

17th overall pick Dexter Lawrence has told the media he is more than just a run stopper. Can he be a dominant 3 down player in the NFL?

A lot of questions surround this defensive front as the season approaches.

A Young Secondary will be Tested

The Giants moved back into the first round to grab who they believed was the best corner in the draft, DeAndre Baker. Baker has not let up a touchdown in his last two years at Georgia (Pro Football Focus) and Pat Shurmur has been impressed with the rookie in training camp.

Other new faces in this secondary are Julian Love, Jabrill Peppers, Antione Bethea, and Corey Ballentine. Jenkins and Bethea have provided the veteran presence needed for this young secondary.

It will be interesting to see what type of role Peppers has not only on defense but other areas. He is a versatile player that was underutilized in Cleveland.

A player to watch here is 6th round pick Corey Ballentine who has the athletic ability to make some impressive plays. He has had to overcome extreme adversity so far in the NFL and everyone is rooting for him.

Finally! An offensive line that the New York Giants can feel good about. The addition of top guard Kevin Zeitler and filling in Mike Remmers at right tackle will pay off big for Eli Manning. Joining Will Hernandez, Nate Soldier, and Jon Halapio, can this renovated line give Eli the time he hasn’t had in years?