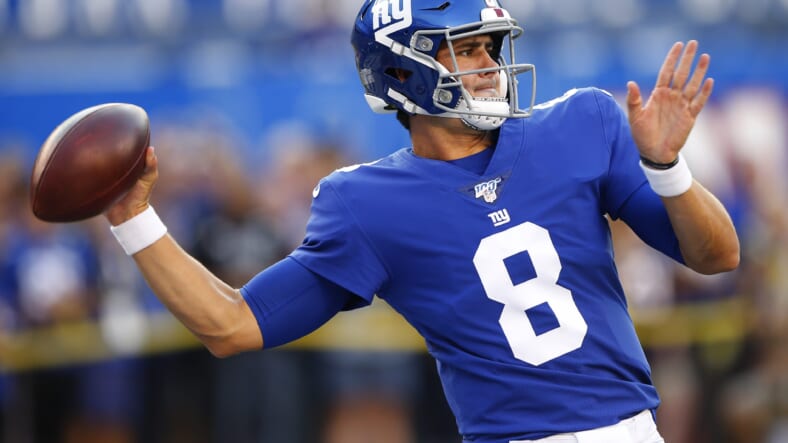 The New York Giants will face off against the Tampa Bay Buccaneers on Sunday in week 3 of the regular season, but there will be one significant difference for Big Blue on offense. Rookie passer Daniel Jones will be the featured quarterback over Eli Manning, who will act as the backup for just the second time in 15 years.

Jones’ physical traits will hopefully open up head coach Pat Shurmur’s playbook, especially on third-down with more mobility and arm strength. However, the catalyst in beating the Bucs will be tight end, Evan Engram.

In just two games, Engram has racked up 164 yards and one score. In week one, the third-year tight end earned 116 total yards, leading the team against a talented Dallas Cowboys defense. Jones will undoubtedly look towards Engram in the passing game to expose a Tampa defense without top linebacker, Devin White.

What Shurmur will look to do with Jones will be similar to how he utilized Case Keenum in Minnesota.

“I see the upside of what can happen with their play-action game,” Romo said at the 2019 NFL on CBS Media Day. “Your ability to be mobile, you saw it in Minnesota withÂ Case KeenumÂ when Shurmur was there. The success he had just from a little bit of the mobility, that really does help.”

The play-action will be an influential part of the Giants offense moving forward, especially with Saquon Barkley’s ability to draw defenders closer to the line of scrimmage. Jones can use his legs to pull outside of the pocket and expose corners in man-coverage. Gaining Sterling Shepard back will also be a significant boost to the offense, but Engram will remain the focal point in the offense this upcoming weekend with White ruled out.

I expect to see the RPOs (run-pass-option) increase for the offense. Jones is versed in this facet from his days with the Duke Blue Devils. This required the quarterback to make reads after the snap rather than before, which was primarily how Manning operated. Daniel’s first game as a starter for the Giants will be an exciting one.