New York Giants: That Ereck Flowers Play Is Worse Than You Think 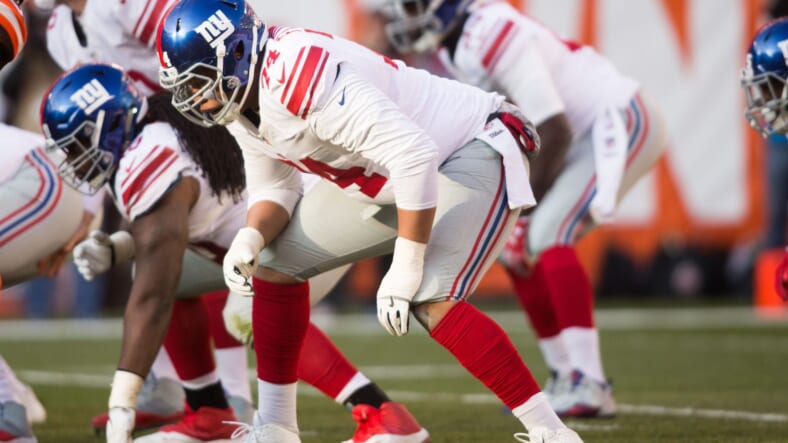 Imagine this. The New York Giants come out for what should be a fairly routine drive against the Jacksonville Jaguars. They’re in a heavy formation that should have good pass protection, and Eli Manning drops back to look for a target downfield.

Odell Beckham Jr. is losing his defender and getting open with a slant route on the weak side of the formation, but Manning is pressured by a pass rusher coming from the edge of the formation and has to throw the ball high. When Beckham goes up to catch the ball, he’s hit by a Jaguars linebacker before he can get set and start running. He has to leave the game with an injury, before even playing a full quarter of regular season football this season.

Fortunately, that’s not what happened. Beckham caught the ball without problem, even though it did end up over his head and forced him to jump for it. The rest of the play, though, was very real and the Giants were penalized seven yards for it. The reason? After being completely beat on the right side of the line, Ereck Flowers resorted to going for a trip that had absolutely no subtlety and would be nearly impossible to sneak past the referee.

The Giants paid the price and would replay first down with 17 yards to go. The gain from the pass? Eliminated because of the penalty. Not only that, but the play could have been worse. The Beckham injury is only a hypothetical scenario, but it shows how much a team’s blocking can affect the game. The high throw was a direct consequence of Flowers being beat so quickly and easily. If something bad happens because of a rushed throw, the blocking is partly to blame.

Oh, and if you maybe thought that Flowers would bounce back later in the drive, it didn’t happen. A couple of plays later, Manning managed to make up for the loss of yards by throwing deep to Evan Engram in what should have been a highlight reel play. Instead, it didn’t count for anything because Flowers once again went to an illegal technique and held his opponent to allow Manning to roll out.

Instead of a first down, the Giants were faced with a 2nd and 20. Maybe second string tackle Chad Wheeler isn’t the perfect player. He did lose in the battle for the starting job at right tackle after all, meaning the coaches saw something in Flowers that they didn’t see in him. But that was before the actual games were played.

The Giants might find it worth it to look into playing time for Wheeler. He might not be a good right tackle, compared to others in the NFL. He might hardly manage to be an average right tackle. But at the moment, the Giants don’t need good. They just need someone who isn’t a risk to take yards away from the team with bad penalties and endanger the health of the skill position players with criminally bad blocking.