New York Giants: Stock Up, Stock Down After Preseason Week one 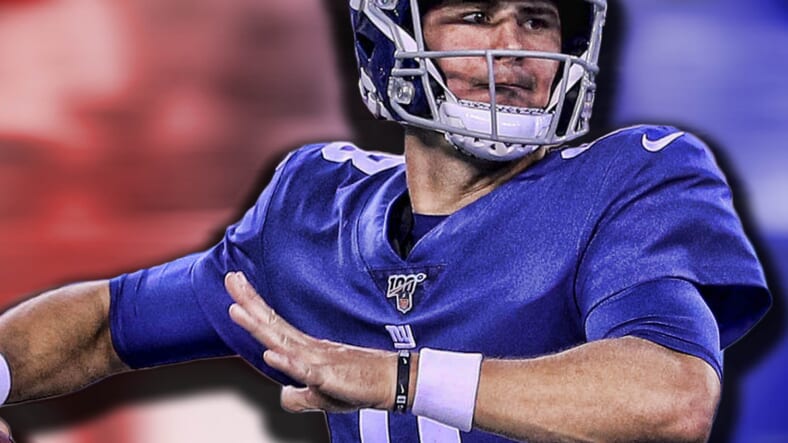 The New York Giants played their first preseason game of the 2019 season Thursday night. The Giants faced off against the little brother New York Jets in a so-called “Snoopy Bowl.” The Giants won the game 31-22.

Tthe Giants’ sixth overall pick from the 2019 NFL Draft, Daniel Jones, made his highly anticipated debut in the first quarter of Thursday’s game. Daniel Jones absolutely lived up to the hype.

Jones only played one possession, but he impressed just about every fan and analyst he could with that one possession. Daniel threw five passes and completed all five of them for 67 yards and 1 touchdown.

The rookie capped off the impressive drive with a 12-yard touchdown pass in the corner of the endzone to Bennie Fowler. Check out every pass from Daniel’s awesome debut below:

Every throw from the @Giants QB's performance 👏 pic.twitter.com/0r5JRQOOfJ

Daniel Jones’s impressive play gives Giants fans hope and is his first step at proving the doubters wrong. If he keeps this up, we could see a serious quarterback competition form. Major stock up for young Danielson.

The Long Island native outside linebacker Jake Carlock had an impressive first NFL game on Thursday. The undrafted rookie came away with one sack and an interception that he returned for a touchdown.

Jake Carlock tips it and picks it and takes it to the house for a @Giants TD!

Carlock was a longshot to make the roster, but after an electric performance against the Jets, it looks like Jake could be a darkhorse depth player to make the roset. Obviously, he will need to prove this was not just a fluke, but what an excellent performance from a little-known rookie! Stock up.

Paul Perkins was a player that many were excited to see prior to Thursday’s matchup. The forgotten running back has had a solid training camp and reminded people why he was once a starter on this team.

Unfortunately, this did not carry into Thursday’s preseason outing. Perkins carried the ball 4 times, gaining only 9 yards. To make matters worse, Paul Perkins fumbled after catching a short passÂ in the second quarter.

Perkins’s poor play hurts his chances of making the team. He will need to bounce back from this and have an impressive outing next week in order to secure a roster spot. Cuts are coming up so players need to get on their A-game as soon as possible. This is especially true for Perkins. He might have fumbled the second-string running back job away tonight.

The Giants’ secondary was completely rebuilt this offseason and this generated a lot of excitement heading into the first preseason game.

One rookie defensive back in particular that Giants fans were excited about was Julian Love. Unfortunately, Love did not have a great game on Thursday. Julian made some communication mistakes and got beat a couple of times early in the contest.

The Jets’ touchdown on their opening drive came against Julian Love and DeAndre Baker:

Granted, it is only the first preseason game. There is not too much to worry about with Julian Love. Just, maybe Giants fans should scale back their expectations a bit. These guys are rookies, they are still getting acclimated to the NFL. It takes time.

On a more encouraging note, Julian Love did bounce back later in the game with a nice pass breakup: