New York Giants: Should There Be A Quarterback Competition? 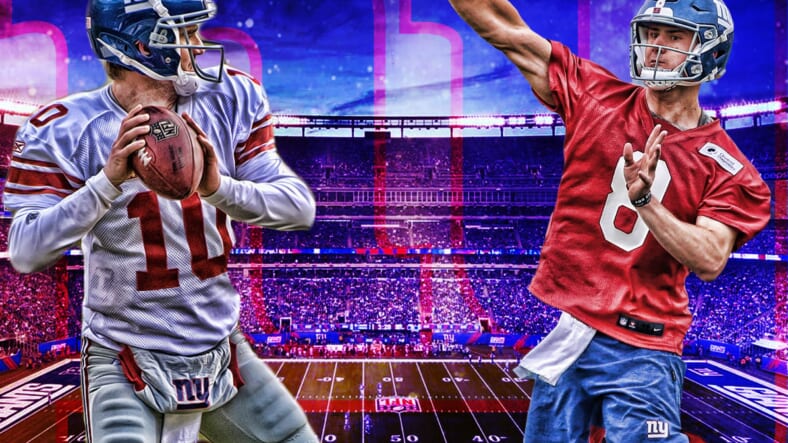 The New York Giants officially begin training camp this week. Along with training camp comes numerous position battles. This year, the Giants might have a positional competition that they have not had in over a decade.

The Giants controversially drafted quarterback Daniel Jones with the 6th overall luck in the 2019 NFL Draft. Eli Manning is 38 years old and has shown signs of regression, plus New York knew they needed to find the heir apparent sooner than later.

With this draft selection comes numerous headlines and debates within the New York media. Many fans have debated that the Giants should start Daniel Jones instantly and begin moving on from Eli Manning. The Giants do not seem ready to do this yet, but it is a possibility.

With controversy and debate surrounding who should start at quarterback for the Giants in 2019, would it be wise for the Giants to declare a competition for the starting job?

Why There Shouldnâ€™t Be

The Giants drafted Daniel Jones in the top ten, but many analysts looked at him as a day two prospect. Jones will be on a mission to prove all doubters wrong throughout his career, but his chance to prove himself should not come soon.

Eli Manning is a sixteen-year veteran quarterback. He has never missed a game due to injury and always sets a prime example of how an NFL quarterback should conduct himself.

But some seem to forget that Eli Manning was not a day-one starter. In 2004, New York began the season with Kurt Warner as their starting quarterback. Warner was ushered out of the lineup mid-season for the rookie Manning, but the job was not handed to Eli.

Eli Manning was a number one overall pick that the Giants traded an arm and a leg for. Still, they did not hand him the job. They should not hand it to Daniel Jones either.

New York could stunt Danielâ€™s development if they force him into the action too soon. Giants fans do not want to see Daniel Jones perform as Josh Rosen did in his rookie season.

The Giants (as they have said) will continue with Eli Manning as their starting quarterback. This is the way it should be. Manning is a fully prepared and fully capable quarterback. Giants fans should hope Daniel Jones does not play this year. That would mean that the Giants are winning.