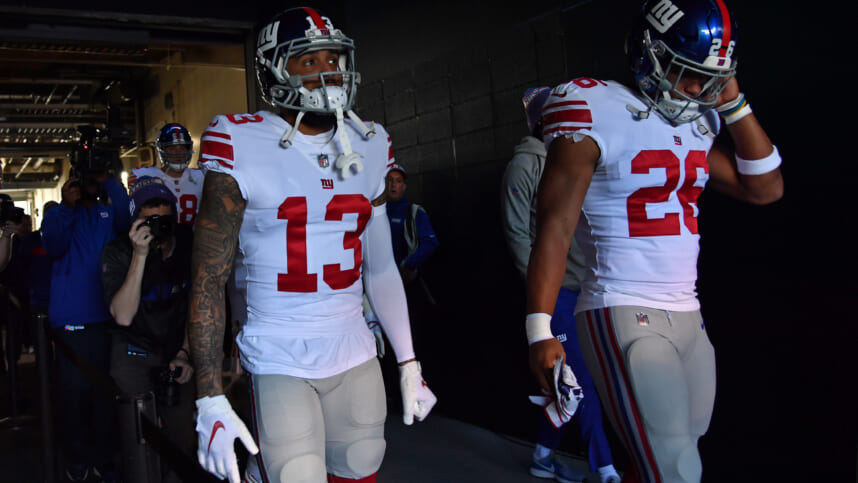 Former New York Giants star receiver Odell Beckham Jr. has been recruited by a number of players on a myriad of teams, most recently the Dallas Cowboys. Ranging from owner Jerry Jones to prominent defenders like Micah Parsons, OBJ has received plenty of attention, but he continues to lead Giants fans on in hopes of a potential reunion.

Beckham is coming off a Super Bowl win with the Los Angeles Rams last season, being acquired from the Cleveland Browns to help their playoff push. At 30 years old, Beckham hasn’t recorded a season with over 1000 receiving yards since 2019 and is coming off his second torn ACL — expectations should be low for his return. However, that doesn’t mean his value can’t be extrapolated, especially with a modernized Giants offense.

In fact, star running back Saquon Barkley suggested that OBJ returning to Big Blue would be an exciting reality.

“It would be a great story to come back to the place that he was before and continue to build success.”

The New York Giants featuring Saquon and Odell Beckham Jr. would be awesome:

Saquon and OBJ spent one season together in 2018 before former general manager Dave Gettleman traded the star receiver to the Cleveland Browns. OBJ went on to struggle with Cleveland, recording just one season with over 1,000 yards, sustaining a number of injuries that limited his production.

However, he made a significant impact for the Rams during the playoffs but having just worked his way back and rehabilitated from another serious knee injury, there’s no saying what his value will be moving forward.

Beckham recently indicated that he’s looking for a long-term home, so the Giants would have to sign him to a multiyear deal.

Considering they are walking a thin wire regarding salary space, the likelihood of new general manager Joe Schoen acquiring OBJ off the free agent market is unlikely. If he signs a deal for the rest of the 2022 season and hits the open market once again, I wouldn’t be surprised if the Giants brought him back next year, but given how cash-strapped they are, the chances are slim.

Nonetheless, Schoen did indicate that he had been in contact with Beckham‘s representatives, so the dream remains very much alive.