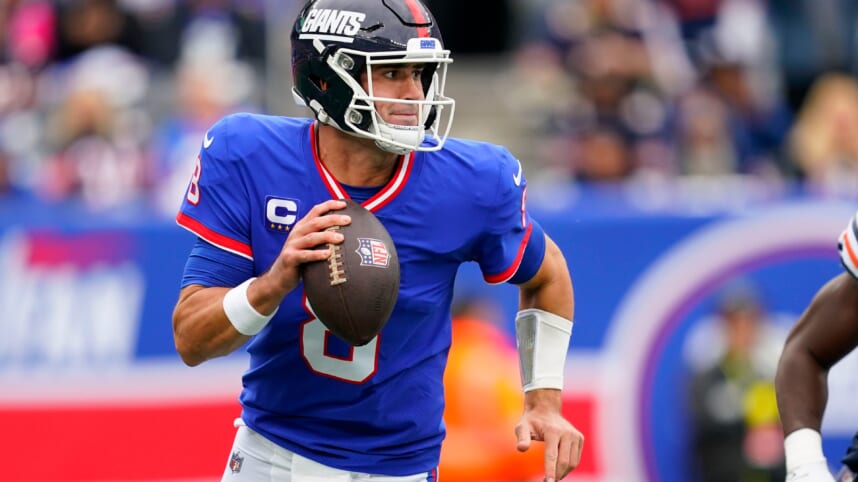 In a prove-it year, New York Giants fourth-year quarterback Daniel Jones is playing his best football. The 25-year-old has been instrumental in the Giants’ spectacular 6-2 start.

Jones has always had traits that gave up him a chance to be a great player. His athleticism, ability to throw the deep ball, and, most importantly, his toughness are all there for him to excel at the most important position, leading a franchise.

Now, under the tutelage of head coach Brian Daboll, Jones is being put in a position to be successful and is raising his level of play. Despite having arguably the worst group of wide receivers in the league at his disposal, Jones is playing well, improving in one key area in particular.

New York Giants: 3 players who need to step up against Houston in Week 10

Jones may only be throwing for 175 yards a game with a season-high of 217, but he has worked to limit mistakes, and it is making a key difference for the Giants.

He has thrown for just six touchdowns, but Jones has thrown all of two interceptions this year on 220 passing attempts. Jones has had three fumbles, two of which he lost. Impressively, the majority of his turnovers were last-ditch efforts turned bad, notably to close a half or a game trying to push the field.

In total, Jones has four giveaways this year, an average of one every two games. This is significant progress in comparison to his previous season turnover amounts of 28, 17, and 12 (11 games).

This progress has been monumental to the Giants team success. The Giants have won the turnover battle in four games (all wins) and tied with zero once as well.

The formula for the Giants football team under Daboll is to limit turnovers and not beat themselves. Jones is doing a stellar job in that regard, and it is directly translating to team success for the signal-caller in the win column.