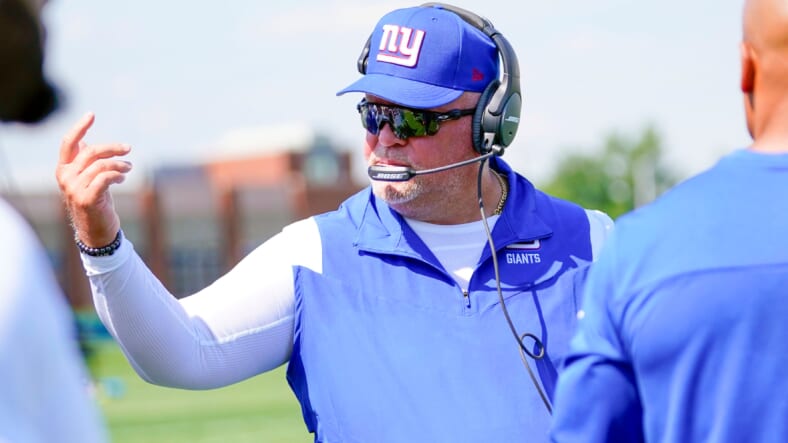 The New York Giants’ defense ranks ninth in the NFL in points allowed per game, holding opposing offenses to an average of 19.6 points on Sundays (ESPN). A big part of the Giants’ winning equation in the defensive formula is the factor of aggression. Wink Martindale is known for sending heat. This season, the Giants are blitzing at an astronomically high rate, a rate higher than every other defense in the NFL.

The Giants rank first in the NFL in blitz rate, blitzing 40.3% of the time (via Matt Bowen of ESPN). As a result of this, the Giants’ defense has totaled 16 sacks through eight games.

Martindale has used a wide array of blitz packages to keep quarterbacks on their toes. Pressure comes from all over the place. Safeties, cornerbacks, and off-ball linebackers are frequently used in Wink Martindale’s defense as extensions of the pass rush.

On top of sending the most pressure in the NFL, Wink Martindale is also running an aggressive coverage style. The Giants are employing Cover 1 (Man-Free) on 41.3% of snaps (via Matt Bowen of ESPN).

Cover 1 is an aggressive defensive coverage that puts the defense’s cornerbacks in single man-coverage, freeing up available defenders to contribute as pass-rushers.

The Giants’ single-high safety scheme has relied on the talented ballhawk Xavier McKinney. With McKinney out for a minimum of four weeks, the Giants may look to decrease their total usage of the Cover 1 scheme. However, Julian Love is more than capable of filling that role, which might encourage Wink Martindale to keep his game plan intact.

One thing the Giants are not doing is sitting back in a soft zone and letting opposing offenses take what’s given. The Giants are running the least amount of Cover 2 (Two-Deep Zone) in the NFL, utilizing that defensive coverage on only 11.4% of defensive snaps (via Matt Bowen of ESPN).

This high frequency of blitzes utilized by Wink Martindale should come as no surprise. Martindale was known for applying pressure during his tenure with the Baltimore Ravens. The Ravens had the sixth-highest blitz percentage in 2021 (31.1%). In 2020, Martindale’s Ravens blitzed 44.1% of the time, the highest percentage in the NFL. 2019 was Martindale’s most impressive and most aggressive season as defensive coordinator. That year, the Ravens blitzed a league-high 54.9% of the time and only allowed 15 total touchdowns.

Wink Martindale was a home run hiring for the New York Giants and Brian Daboll’s staff. Through the first half of this season, Martindale has managed to get the most out of his defensive personnel. The Giants are one of the NFL’s biggest surprises this season, totaling six wins in eight games despite finishing the 2021 season 4-13. Much of the Giants’ success has been achieved on the defensive side of the ball as Wink Martindale has put together an elite, aggressive defensive scheme that has given opposing offensive coordinators nightmares.

As the Giants come out of their Week 9 bye, the team has its eyes set on their first playoff appearance since 2016. Brian Daboll, Wink Martindale, and the rest of the coaching staff will strive for perfection to help this New York Giants team reach new heights in 2022.