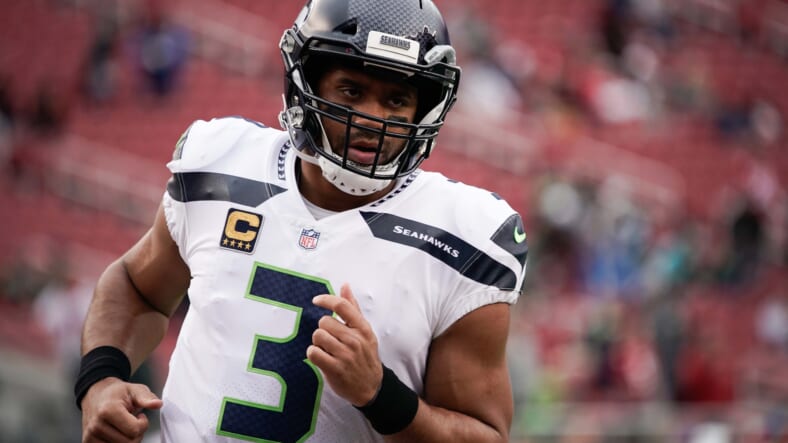 The New York Giants have been brought up in one of the NFL’s most exciting trade rumors of the year this week. Future Hall of Fame quarterback Russell Wilson could be on his way out of Seattle. The Seahawks legend is mulling a trade request and has put together a shortlist of teams for which he would waive his no-trade clause. The New York Giants happen to be on that short-list.

This is a different list than the one Adam Schefter reported on Russell Wilson’s behalf back in February. At the beginning of this year, Russell Wilson’s shortlist included the Cowboys, Saints, Raiders, and Bears. The Cowboys and Bears can be removed from this list with Dak Prescott back under center for Dallas and Justin Fields taking the reigns in Chicago.

With this new trade rumor development, a question begs to be answered: should the Giants entertain a trade for Russell Wilson?

Should the Giants try to trade for Russell Wilson?

The New York Giants are at a new, giant crossroads. At 4-8, the Giants’ season is practically over. Fans are now looking ahead to the offseason, which should be an exciting one for New York. The Giants hold two first-round picks in the 2022 NFL Draft and are likely to bring in a new general manager. But could these draft picks be shipped away in exchange for Russell Wilson?

Daniel Jones has failed to win the fans over and prove to the coaches that he is a franchise quarterback. With this in mind, New York could be a landing spot for Russell Wilson. However, the possibility becomes far less likely once the Giants’ salary cap situation is evaluated.

Simply put, the Giants have a horrible salary cap situation ahead of them in 2022. As bad as some fans might want them to trade for Russell Wilson, they need to realize that it will be nearly impossible for the Giants to make that happen.

Russell Wilson is 33-years old and probably has another half-decade of football left in him. Before his thumb injury this season, Russell Wilson was playing at an All-Pro level completing 90-125 (72%) passes for 1,196 yds, 10 touchdowns 1 interception, with a 125.3 rating.Â Trading for the seven-time Pro Bowl signal-caller would transform the Giants overnight and make them playoff contenders. But their lack of money would cause the Giants to fail to build a decent offensive line and competent roster around Russell Wilson, likely wasting the last years of his career.

One of Russell Wilson’s chief complaints about the Seattle Seahawks is their offensive line. The Giants have arguably the worst offensive line in football. It is unlikely that issue would be resolved if the Giants had to give up one or both of their first-round draft picks to acquire Russell Wilson. Even though fans would love to see this dream come true, it is unlikely, pipe dream that the New York Giants simply cannot afford to make.