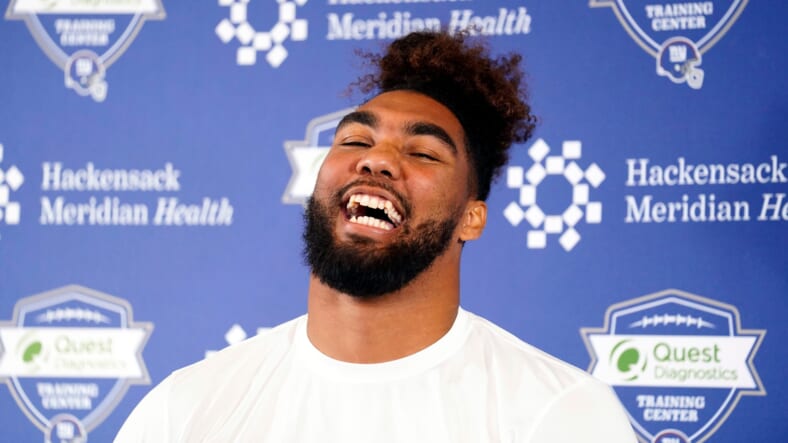 Former New York Giants general manager Dave Gettleman left a messy salary cap situation behind for Joe Schoen and Brian Daboll. Unfortunately, the Giants didn’t have much cash flow this off-season to improve the roster, finding themselves in the negative after 53-man roster cutdowns.

On Tuesday morning, the Giants sat at $-6.7 million, per Over The Cap. They looked to clear a bit of cash to hopefully add insurance funds for the 2022 regular season. The only place to find that money was from a big contract, so they decided to restructure Leonard Williams’ deal ahead of Week 1 this upcoming Sunday.

How much money did the New York Giants add?

Schoen opened up about $12 million in salary space, converting $17.88 million into a signing bonus. Restructuring Leo’s contract this way will add a void year to his deal, which finalizes in 2023. This means that he will count $6 million during the 2024 season (void year), similar to what the Giants did with Nate Solder to clear salary space and are still paying him after restructuring his deal last year.

Leonard is currently on a three-year, $63 million deal with an out after the 2022 season. That “out” would’ve provided them $18 million in free cash flow, but that number will likely drop after restructuring his deal and opening up $12 million in salary.

At the very least, the Giants are now out of the negative in team salary space, hovering around $5 million in available funds. That isn’t much to address any injuries that happen during the season, so they will have to rely heavily on some of their younger players and rookie class. With some tough luck, two of their draft picks have already sustained season-ending injuries and they are dealing with a few issues at prominent positions.

The Giants certainly look like they are rebuilding, resetting the cap, and relying on several unproven players at important spots. Clearing a bit of salary space will go a long way in case they need to sign any players last minute, but $5 million isn’t going to improve the roster much.