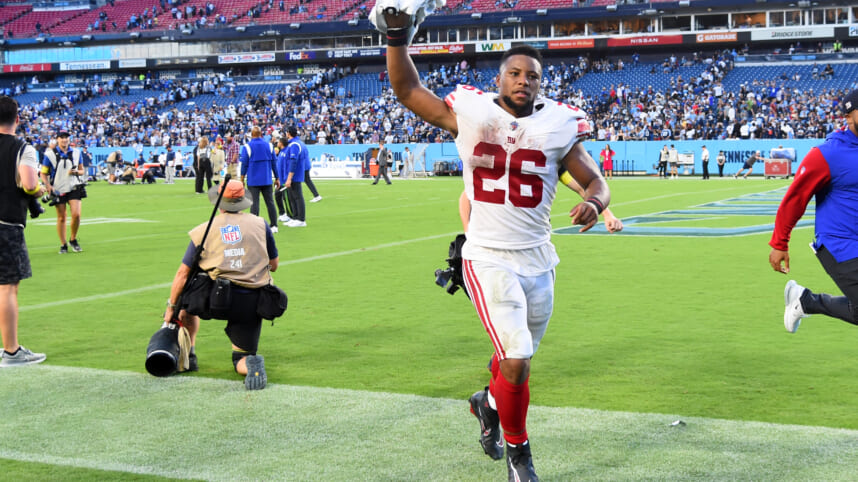 Weaknesses are spread far and wide across the Giants, which were put on full display in the first half, trailing 13–0 heading into the 3rd quarter. However, running back Saquon Barkley put the team on his shoulders, tallying 164 rushing yards and 30 receiving yards in Week 1 of the 2022 NFL season. The 25-year-old also contributed a touchdown and massive two-point conversion to give the Giants a one-point lead with about a minute left on the clock.

The New York Giants are showing aggression and trust:

New head coach Brian Daboll trusted his playmakers, instilling immediate confidence in his team with aggressive strategies and playcalling. The Giants’ offensive line struggled in pass protection for the most part, but they opened up massive running lanes for Barkley to exploit.

Running like a madman, Barkley has been trying to quiet the doubters since recovering from a torn ACL back in 2021. Having recorded just 593 rushing yards in 2021, he’s already earned more than a quarter of that in just one week this season.

Barkley is staying humble, realizing it is just one game and he needs to continue performing, already turning his attention toward the Carolina Panthers in Week 2.

“It’s just one game, to be honest. That’s how I look at it,” he told reporters. “Obviously, at the end of the day, I’m excited to get the win. But personally, I just gotta keep coming. Something that keeps sticking with me that coach (Brian Daboll) says, just enjoy the process. That’s something that I’ve been battling the last two years with rehabbing and injuries, and that’s been my mindset. So, no matter what. Win, loss, tie, I was going to come in here with the same mindset and just keep enjoying the process.”

Considering how dominant Barkley looked in this game, the Giants must understand he represents their entire offensive success. Quarterback Daniel Jones had an up-and-down performance, giving up a bad interception in the red zone and fumbling the ball via a free rusher in the first half.

Daboll ripped into Jones after the interception specifically, hopefully providing some necessary discipline so he can begin to alleviate these mistakes. Nonetheless, Jones should buy Barkley a juicy steak after his stellar performance, and there will likely be many more where that comes from, given Barkley’s capabilities.