New York Giants: Ranking the quarterbacks in the NFC East 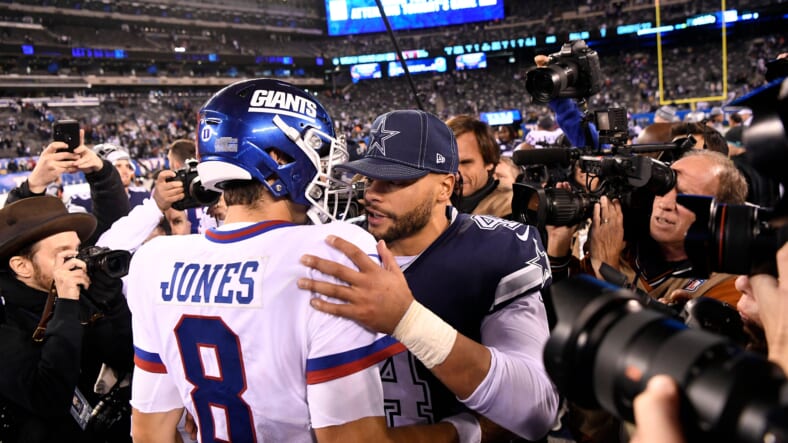 Last season, the NFC East was one of the worst divisions in football, as the New York Giants barely missed the playoffs as a six-win team. The Washington Football Team secured the division with seven wins, a 0.438 victory percentage, barely scoring more points than they allowed. They were the only team in the NFC East who had a positive net point margin with +6, as the Giants landed at -77.

Moving forward, most of the teams in the division took significant steps forward on paper regarding personnel decisions and signings. However, the importance of the quarterback position remains true, and with Washington transitioning over to Ryan Fitzpatrick, a veteran journeyman, and the Eagles sticking with sophomore QB Jalen Hurts, the passers in the NFC East represent major questions.

Prescott is the only true and tried quarterback in the division, having thrown nine touchdowns before going down in Week 5 against the Giants with a broken ankle. Having tossed 30 touchdowns the year before, Prescott signed a massive six-year, $250 million deal with the Cowboys, which could either bite them in the butt or deliver a franchise passer for the next half-decade.

Dak is the only quarterback in the division that lands in the top 10 of passers in the NFL, and with his ability to utilize his legs, he is a dual-threat in both the passing and running game. Pairing him with coordinator Kellen Moore has done wonders for his career.

Giants’ quarterback Daniel Jones desperately needs to take a step forward in his third season in the NFL, and the expectation is that he will do just that with the additions of Kenny Golladay, Kadarius Toney, and the return of Saquon Barkley. Nonetheless, his success relies heavily on the performance of the offensive line, which the Giants did very little to upgrade this off-season. In fact, they cut their best guard in Kevin Zeitler, replacing him with will Hernandez at RG and supposedly cementing Shane LeMieux at LG.

After an adequate rookie season where Jones tossed 24 touchdowns, he took a step backward in the production category due to a lack of weapons and scheme. With a year of experience under Jason Garrett’s system and the hope that they will operate a more downfield-centric strategy, Jones could easily end up being the second-best quarterback in the division, if not eventually pushing Prescott for the top spot. Again, his future success relies heavily on the efficiency of his protection and maximizing his strengths through play-calling.

While Ryan Fitzpatrick has been a solid quarterback throughout his career, he is a journeyman who has spent time on eight different teams, playing the last two years with the Miami Dolphins. Fitzpatrick is preparing to turn 39 years old, and while heâ€™s capable of magical moments, thereâ€™s a reason he only started nine games last year.

Fitzpatrick goes through wild swings of production and inefficiency, tossing 13 touchdowns and eight interceptions last year with a 68.5% completion rate. Washington is taking a serious gamble with Fitz as their primary starter, but if all goes well, he could have a solid season. Considering his history, though, I prefer Jonesâ€™s youth rather than Fitzpatrickâ€™s experience and heroic approach.

The worst quarterback in the division by default is Jalen Hurts, who played in 15 games last year and finished with a 52% completion rate. His final stat-line read 6 touchdowns, 4 interceptions, and fumbled nine times over four starts. Overall, he played 30% of snaps after the Eagles decided to go with Hurts over Carson Wentz.

Jalen is primarily a running quarterback until proven otherwise, as completing 50% of his passes simply wonâ€™t get it done in the NFL. Philadelphia is taking an extreme risk, and at this point, he is the worst passer in the division.