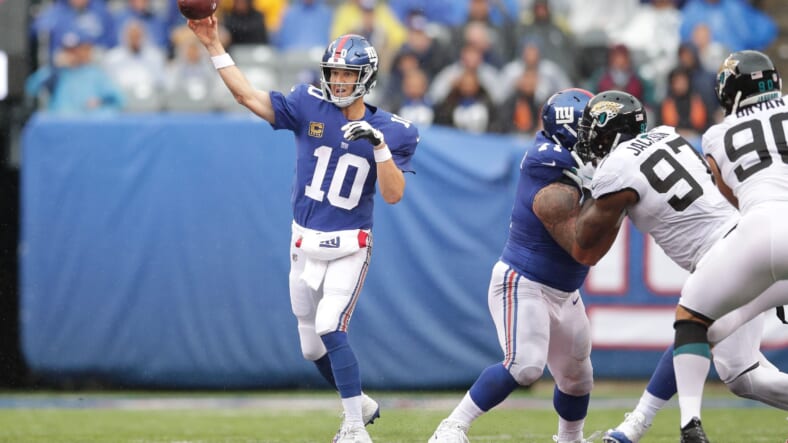 On Wednesday morning, New York Giants quarterback Eli Manning was questioned by reporters near his locker room. Following the week 16 loss against Indianapolis, Pat Shurmur confirmed that Manning will start the final game of the season against Dallas. Despite this, there has still been no status update on the 15 year veteran’s future with the Giants.

What Has Eli Said About His Future?

While being questioned by his locker on Wednesday, a reporter asked the quarterback if he “expects to be here next season as the starting quarterback.” Manning responded with “I don’t know.” He then elaborated on that statement. Eli said he has not got into that or thought much about that yet.

With one game left this season, it is just about time for Manning to begin to think about his future. The Giants have had a disappointing season at 5-10. They are expected to be picking in the top ten again in this year’s draft. The uncertainty surrounding Eli Manning leads many to believe the Giants will select a quarterback in the first round this year. (Quotes provided by @art_stapleton on Twitter).

What Has Coach Shurmur Said About Eli’s Future?

Head coach Pat Shurmur was asked on Wednesday if he gives any thought at all to the possibility that this will be Eli Manning’s final game as a Giant.

Pat Shurmur gave a traditional coach’s answer. All he will admit to being focused on is the upcoming game. With a week left in the season, it will be interesting to see how Pat Shurmur responds to this question following this week’s game.

The Giants will be closing out this disappointing season at home against the Cowboys. With the possibility of this being Manning’s last game as a Giant, all eyes will be on number 10.