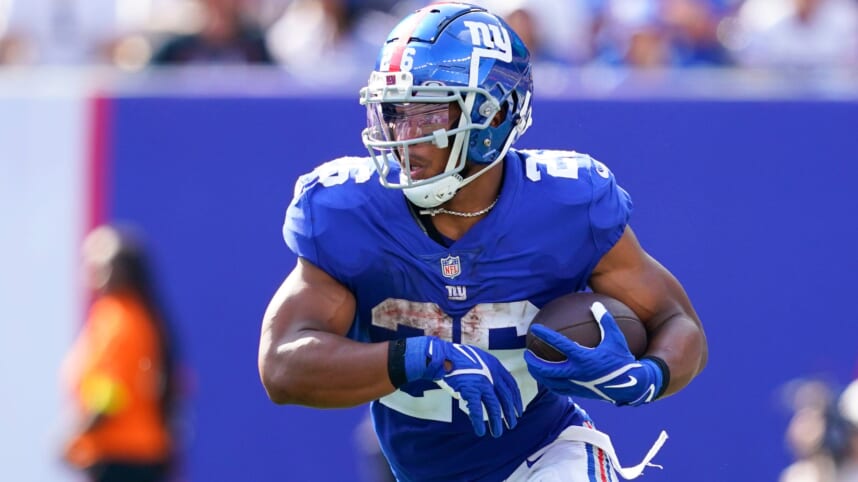 The New York Giants have a big decision to make regarding the potential contract extension of Saquon Barkley. Of course, they also have their attention on quarterback Daniel Jones, who is also entering free agency after the team declined his fifth-year option before the 2022 season began.

Barkley, 25, is currently in the middle of a resurgent season following two years of injury-riddled play. He enjoyed just two games in 2020, 13 games in 2021 but has played all eight games for the Giants this season. He’s already recorded 779 yards, five touchdowns, and 189 yards through the air. In fact, he is on pace for 1,655 rushing yards, which would beat his personal best of 1,307 during his rookie campaign back in 2018.

The New York Giants would like to keep Saquon Barkley around:

If he can remain healthy and continue to boost the Giants’ offense, the likelihood of him signing an extension here remains high. Recently, general manager Joe Schoen indicated that Saquon fits their cultural mold perfectly, and they want to retain him for the long-term future.

Continuing to add pieces to the offense, whether it be on the offensive line or the wide receiver corps, will only help boost his value. The question is, how much would the Giants be willing to allocate toward a potential extension?

To start, the expected franchise tag for a running back in 2023 will be about $12.6 million. That seems to be close to what the team would pay him here over a year on a long-term deal, showcasing their loyalty end keeping one of their star players happy. The biggest year-over-year contract is currently held by Christian McCaffrey, who earns $16 million per season. The next two belong to Alvin Kamara and Ezekiel Elliott at $15 million apiece. Neither are justifying that type of deal at this point in time.

However, given Saquon’s health history, he likely fits in the next level with players like Dalvin Cook, Derrick Henry, Nick Chubb, Aaron Jones, and Joe Mixon, who are all earning around $12– 12.5 million per season.

Coming off one great season is certainly worthy of a pay increase, but the Giants shouldn’t overdo it by making him one of the top earners at the position.

Settling in the tier 2 category seems to be fair, which would also keep the Giants from breaking the bank with other big expenses coming up in the future — the contract extension of Andrew Thomas looms.