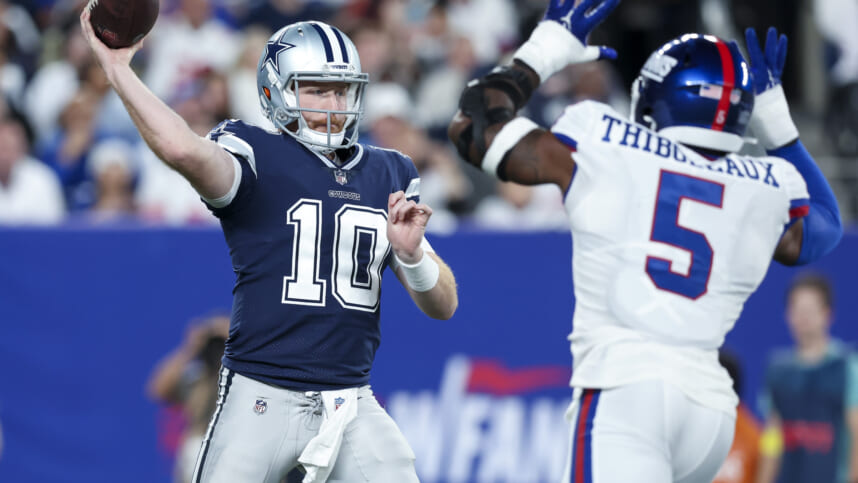 The New York Giants are one of the biggest surprises in the NFL this season, sitting comfortably in the playoff race with a 6-2 record. Big Blue hopes to build on their hot start to the season coming out of their Week 9 bye. But in order to keep the momentum going and contend for the playoffs, the Giants will need some big performances out of a few key players, such as Julian Love, Kayvon Thibodeaux, and Wan’Dale Robinson.

The Giants need safety Julian Love to step up in the second half of the season. New York’s defense suffered a huge loss in the secondary this week with star safety Xavier McKinney being placed on injured reserve. This leaves Julian Love as the defense’s signal-caller for the time being. Wink Martindale will call upon Love to serve an expanded role and be an impactful player in the Giants’ defense.

Julian Love is a co-captain on the New York Giants defense and, with Xavier McKinney out, he will need to step up as the primary leader on the back end. This is a task Love is capable of accomplishing, though.

This season, Julian Love has started all eight games for the Giants as they have achieved their impressive 6-2 record. Love is on pace to set new career highs in combined tackles, sacks, and tackles for loss. On the season, Julian Love has already totaled one interception, two passes defended, one fumble forced and one recovered, 58 combined tackles (career-high of 68), and three tackles for loss.

Julian love is in the midst of contract negotiations with the Giants as they look to extend their most versatile defensive back. Julian Love’s ability to play anywhere in the secondary makes him incredibly valuable to the Giants. Love will have an opportunity to prove that value in McKinney’s absence over the second half of the season.

It has been a solid start to Kayvon Thibodeaux’s rookie season thus far. The 2022 fifth-overall pick has been active as a pass-rusher since entering the lineup in Week Three. In particular, Kayvon has come up big during some of the game’s most crucial moments. The first half of KT’s rookie season is highlighted by his game-winning strip sack on Lamar Jackson in Week 6.

According to PFF, Kayvon Thibodeaux has totaled 17 pressures in six games this season. He has pressured the quarterback three or more times in three separate games. Thibodeaux is not stuffing the official stat sheets, but his numbers are respectable. Through six games, Kayvon has totaled 14 combined tackles, three quarterback hits, and one sack (the game-winner shown above).

Despite missing the first two weeks of the season, Kayvon Thibodeaux has had a massive impact on the Giants’ pass-rushing department. The rookie has drawn plenty of attention from opposing offensive linemen, beating them many times but also opening up opportunities for his teammates. As the Giants attempt to make their first playoff appearance in six years, now is the perfect time for Thibodeaux to break out and push for Defensive Rookie of the Year.

The New York Giants drafted Wan’Dale Robinson in the second round of this year’s draft. The pick came as a surprise to many as the Giants’ wide receiver depth was not considered a need at the time. Rather quickly, though, that notion has changed. The Giants have endured a slew of injuries at the wide receiver position and also traded away wide receiver Kadarius Toney. Wan’Dale Robinson has been impressive this season, but entering the second half of this year, he will need to take his game to the next level.

Wan’Dale Robinson has had a promising target share through the first half of the season that should indicate a breakout to finish the year. He has been targeted 16 times in four games played, hauling in 12 receptions for 107 yards and one touchdown. Robinson is quickly becoming one of Daniel Jones’s favorite targets. Now that he has some playing time under his belt, Wan’Dale Robinson should be ready to become a focal point in the Giants’ offense over the second half of the 2022 season.