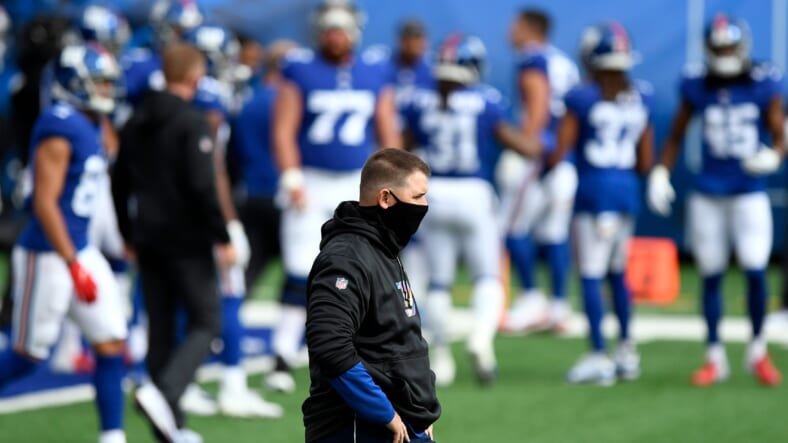 Head coach Joe Judge and the New York Giants take on the Washington Football Team at MetLife Stadium on Sunday, Oct. 18, 2020, in East Rutherford. Nyg Vs Was

The New York Giants have been officially eliminated from the playoffs. After an exciting win over the division-rival Dallas Cowboys today, the Giants had to wait until tonight to see if their season would continue. All the Giants needed was a Philadelphia win over the Washington Football team.

Unfortunately, the Giants did not get what they needed out of their rivals, the Philadelphia Eagles. The Washington Football Team beat the Eagles on primetime and won the NFC East for the first time since 2015. The Football Team won by a final score of 20-14.

The New York Giants, now eliminated from playoff contention, can focus their attention on the offseason. Had they won, they would have played the Tampa Bay Buccaneers next Saturday. Instead, Washington will host Tampa Bay and the Giants will look ahead to free agency and the draft.

The Giants clinched the 11th overall pick in the 2021 NFL Draft today. Their win over Dallas improved their record to 6-10. This is an improvement over last year’s 4-12 record. However, this win did push the Giants down the draft order and they are now selecting behind the Dallas Cowboys.

Regardless, it was a sloppy, interesting, but hopeful season for the New York Giants and rookie head coach Joe Judge. In their first year without Eli Manning, the Giants played meaningful football through December. If not for some heart-breaking losses down the stretch, the Giants could have won their division. Unfortunately, the Giants did not put together enough wins to control their own destiny.

Looking ahead to 2021, fans can anticipate a bloodbath between the Giants and the Eagles. After Eagles’ head coach Doug Pederson’s decision to pull quarterback Jalen Hurts from their Week 17 game in the fourth quarter, suspicion arose amongst the football world. It seemed to many that the Eagles tanked this game and disregarded all competitive integrity in order to gain a higher draft pick. Needless to say, Giants fans and players alike are not happy about this decision by Pederson and the game’s outcome because of this decision. New York will not forget this night and will eagerly anticipate the opportunity to seek revenge in the 2021 NFL season.