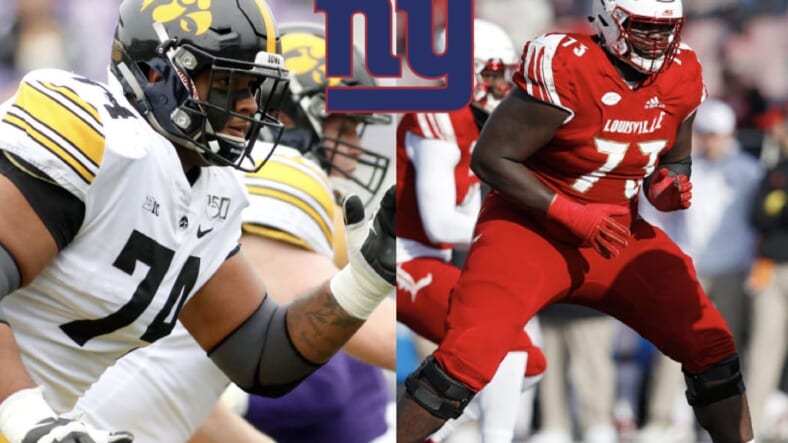 Two of the most sought after offensive tackles in the upcoming 2020 NFL Draft had the opportunity of showing off their athleticism during the Combine this week. Both Mekhi Becton and Tristan Wirfs, two of the New York Giants‘ top OT prospects, blew the competition away, portraying elite speed for a 364-pound lineman, and incredible hops, setting a Combine record at the position.

The Giants currently sit with the 4th overall pick in the draft, meaning they have a bevy of different avenues they can elect to take. Either they can draft an offensive tackle, trade back, or select an elite defender like Isaiah Simmons. The possibilities are endless, but with such a deep class at offensive tackle, it’s possible they can trade back to accumulate more capital and still land a player of their choice.

However, both Becton and Wirfs were incredible on Friday. Becton, who featured for Louisville in 2019, ran the 40-yard dash in 5.11 seconds — an astonishing time for a man of his size.

Wirfs posted a 36.5-inch vertical jump and a 10-foot, 1-inch broad jump, both Combine records for an offensive lineman. The Giants have the opportunity to land either one of these incredible prospects, and while Becton has the worst film of the top four tackles, he also has the most room for growth based on his size and athleticism.

Now, GM Dave Gettleman is reportedly considering trading back a few slots to offer the 4th pick to a quarterback-needy team. In this scenario, the Giants have two great opportunities in front of them. Either, they land one of the top defensive options in the draft — Simmons, Derrick Brown, Jeff Okudah, or they tackle an offensive tackle. Alternatively, they can select a defensive playmaker and package two first-round picks (one acquired in the trade back) and move back up into the first round to land a prospect. Options like Houston’s Josh Jones and others should be available in the mid-20s if the Giants can get to that spot.