New York Giants: How to solve the last piece to the puzzle on offense 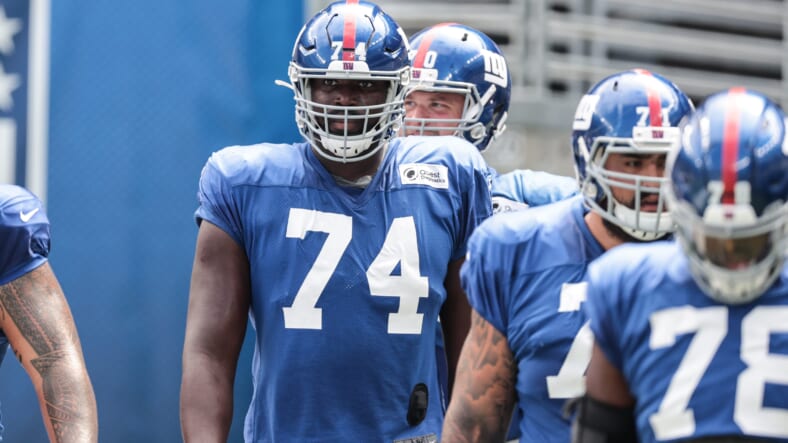 The New York Giants went big in free agency, spending boatloads of money to provide quarterback Daniel Jones with sufficient weapons. The Giants signed wide receiver Kenny Golladay to a big multi-year contract. Golladay was the top wide receiver on the market and he will provide Jones with a dependable receiving option. The Giants also signed tight Kyle Rudolph to be a reliable receiving threat.

New York’s main point of emphasis entering free agency was to add playmakers for Daniel Jones. The Giants’ signal-caller is entering the third season of his career and it is crucial that Daniel Jones breaks out in 2021 to establish himself as a franchise quarterback.

Daniel Jones struggled in 2020 with a depleted group of playmakers and a poor offensive line. The Giants have fixed the playmakers. They added Golladay and Rudolph and also have Saquon Barkley returning from injury. There is also a chance the Giants add another playmaker to the mix in the 2021 NFL Draft. This is all great, but what has New York done to fix the offensive line?

The Giants have not done much to fix the offensive line. Fixing the offensive line is the last piece to the puzzle for the Giants to surround Daniel Jones with sufficient talent and have a good offense. Thankfully, the 2021 NFL Draft is full of pieces that might fit the puzzle.

Offensive linemen to target in the 2021 NFL Draft

The Giants could fix their offensive line through the 2021 NFL Draft. There is a plethora of offensive line talent in this year’s class. At the top of the class are a couple of phenomenal offensive tackle prospects, Rashawn Slater and Penei Sewell, who would be significant instant upgrades for the Giants. However, neither one of them is likely to make it out of the top ten.

At eleven overall, a realistic offensive line option for the Giants is Alijah Vera-Tucker out of USC. Vera-Tucker played left tackle for USC in 2020, but he is projected to be an offensive guard in the NFL, a position of need for New York. There are a lot of interior offensive line prospects to be excited about in the 2021 NFL Draft.

The second round of the draft might be a perfect opportunity for the Giants to find a new offensive guard. Prospects like Landon Dickerson and Creed Humphrey are phenomenal centers that could move to guard in the NFL. Wyatt Davis and Quinn Meinerz are a couple more offensive guards that might fit in perfectly with the New York Giants in the second round.

The Giants also have a question mark at right tackle. Dave Gettleman and the Giants seem confident in Matt Peart heading into his second season. But, Gettleman has also said in the past that he is not afraid to draft over players. Offensive tackle prospects like Teven Jenkins and Christian Darrisaw could make sense for New York in a trade-down scenario as they solidify their other offensive tackle position opposite of Andrew Thomas.