New York Giants: How Does The New Offense Compare To The Rest Of The Division 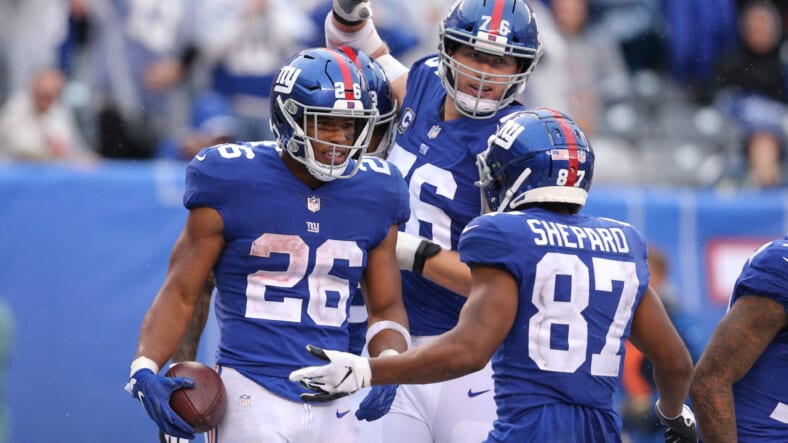 The New York Giants have come in dead last in their division in each of the last two seasons. They have become the least threatening team in the NFC East and have not won the division since 2011.

The rest of the teams in the NFC East have been accumulating young talent for years. The Cowboys have made the playoffs and won the division in two of the last three seasons. Their young core of Dak Prescott and Ezekiel Elliot make them an annual playoff contender.

The Eagles have also been far more successful than the Giants recently. It is painful to say or think about this, but the Eagles won the Super Bowl in 2017 and made the playoffs again in 2018.

Our beloved New York Giants have fallen behind in recent years and it is time for them to get back on track. The Giants made moves to improve their offense in 2019. Let’s see how their new offense compares to the rest of the division:

The Giants’ offensive line has been bad for years. The Giants finally got rid of Ereck Flowers in 2018, but the unit still struggled as a whole, despite bringing in veteran left tackle Nate Solder.

The other three teams in the division all have above-average or excellent offensive lines (when completely healthy). The Dallas Cowboys had two Pro Bowlers on their offensive line in 2018 with left tackle Tyron Smith and right guard Zack Martin. Left tackle Trent Williams of the Washington Redskins also made the Pro Bowl in 2018. The Eagles also had a Pro Bowler in right guard Brandon Brooks. The Giants are the only team in the division to not have a Pro Bowler on their offensive line.

The Giants are trying to buck that trend. In 2018, they drafted left guard Will Hernandez in the second round of the 2018 NFL Draft. Hernandez showed lots of promise in his rookie year and looks like he can be a Pro Bowl-caliber player in the future.

In the 2019 offseason, the Giants acquired a talented offensive guard via trade with the Cleveland Browns. Kevin Zeitler is one of the NFL’s best pass-blocking guards, allowing only 11 total pressures in 2018.

The Giants’ offensive line is the worst in the division. However, it has the potential to improve mightily in 2019 with the addition of Zeitler, Hernandez progressing in his second year, and center Jon Halapio returning from injury.

Fortunately, the Giants still have the best running back in the division, though it is a close race. Saquon Barkley racked up more total yards from scrimmage in 2018 (2,028 yards) than any other running back. But Cowboys running back Ezekiel Elliot was not far behind with 2,001 yards and he also lead the NFL in rushing yards with 1,434 yards.

The Eagles also have a solid group in the backfield. They traded for former Bears running back Jordan Howard this offseason and also drafted Miles Sanders out of Penn State. Howard has racked up 3,370 rushing yards and 24 rushing touchdowns over the past 3 seasons. In 2018, Sanders ran for 1,274 yards and 9 touchdowns at Penn State.

Peterson is 33 years old now and is well past his prime. However, he was still solid for the Redskins in 2018 with 1,042 rushing yards and 7 rushing touchdowns. The Redskins also have a young, unproven back named Derrius Guice. Guice was electric in college at LSU with 2,638 rushing yards and 26 rushing touchdowns in his final two collegiate seasons. Guice tore his ACL in the 2018 preseason but will look to prove himself as a quality NFL running back in 2019.

The Giants have the best running back in the division and even in the NFL. Saquon Barkley will only get better in 2019. However, the team would be wise to add some more talent behind Saquon to keep him from wearing and tearing.

The Giants easily had the best receiver in the division over the last 5 years. That changed in the 2019 offseason when the Giants traded away Odell Beckham Jr.

Now the Giants are left with pass-catchers like Sterling Shepard, the newly acquired Golden Tate, and Evan Engram. Still a solid group despite losing their best player.

The Eagles have one of the best tight ends in the NFL with Zach Ertz. Ertz had the third most receiving yards out of all tight ends last season with 1,113. He is their best skill player on offense and will remain a consistent player for Philadelphia in 2019.

The Dallas Cowboys struggled to find a receiving threat, post-Dez Bryant until they traded for former Raiders wide receiver Amari Cooper in 2019. In only 9 games with the Cowboys, Cooper totaled 725 receiving yards and 6 touchdowns. The Cowboys could use some help at tight end, but Cooper is the best receiver in the division now that Odell is in the AFC North.

The Washington Redskins seriously lack playmakers on the outside. Their leading receiver in 2018 was tight end Jordan Reed with only 558 receiving yards. The Redskins did draft a couple of receivers in 2019 with Kelvin Harmon and Terry McLaurin, but it is hard to imagine these two players will make such a vast improvement to the Redskins’ receiving corps in 2019.

The Giants might not have the best receiver or tight end in the division, but they could have arguably the best group of these positions in the division. If Engram, Shepard, and Tate all reach their full potential in 2019, the Giants’ offense could be electric.

Every team in the division has a young, franchise of future franchise quarterback on the roster. The Giants and Redskins were the last teams to acquire theirs but finally did so in the 2019 NFL Draft.

Carson Wentz had an MVP-caliber season prior to injuring his knee in 2017. In the 13 games he played in 2017, Wentz threw for 3,296 and 33 touchdowns. This lead the Eagles to an 11-2 record. Carson made the Pro Bowl in 2017 but suffered another injury in 2018. If he can stay healthy, he is the best quarterback in the division.

The other young quarterback in action is the Cowboys’ Dak Prescott. Prescott has lead Dallas to the playoffs twice in three years and has thrown for 3,000 yards and 22 or 23 touchdown passes in all three of his seasons in the NFL. He has been to the Pro Bowl twice and is set to receive a big contract extension from Dallas soon.

The Redskins had a problem at the quarterback position but found their answer in the Draft. Their quarterback, Alex Smith, suffered a gruesome leg injury in 2018 that will probably keep him sidelined for all of 2019. So the Redskins drafted Ohio State quarterback Dwayne Haskins in 2019. Haskins threw 4,831 passing yards and 50 touchdown passes in 2018 at Ohio State. It will be interesting to see if he can maintain a high production level in the NFL.

While the rest of the division will all be starting quarterbacks age 27 or younger in 2019, the Giants will be kicking off the season with 38-year-old Eli Manning at the helm. Manning has been underperforming for the past two seasons, failing to top 21 touchdown passes. Regardless, the Giants are committed to him as their starter in 2019. However, if Eli struggles, it could mean the Giants will move on from him as soon as possible.

The Redskins were not the only team to address the quarterback position in the 2019 NFL Draft. The Giants made the controversial decision to draft Duke quarterback Daniel Jones with the 6th overall pick in the draft. It can be debated whether or not Jones was worthy of that high selection, never topping 22 touchdown passes in 3 years as a collegiate starter. The Giants will be hoping that Jones proves any doubters wrong when he gets his chance.

The Giants’ quarterback position is probably the worst in the division. Their young soon-to-be franchise guy is far from a can’t-miss-prospect, and their current starter is a legend well past his prime. Giants fans need to hope and pray that Daniel Jones shocks the world and proves all his doubters wrong in the future.