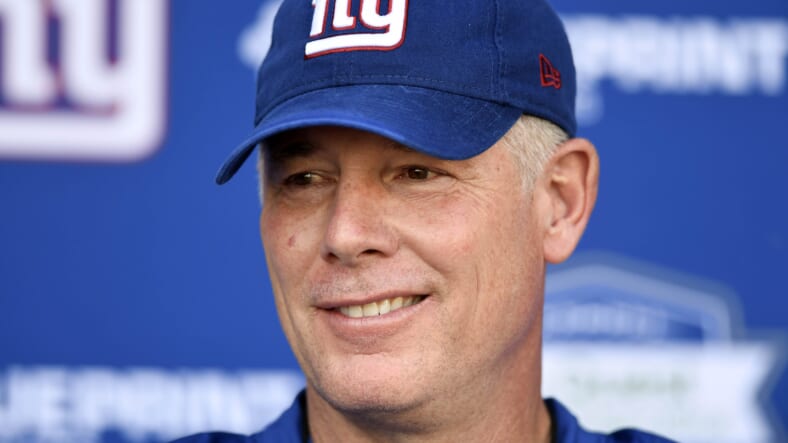 With the 2019 NFL Scouting Combine taking place this week, the New York Giants’ staff conducted interviews on Wednesday. The hot topic surrounding these interviews was, of course, the Giants’ quarterback position. The Giants were asked about their plans for the position in 2019 and beyond. The Giants would not reveal too much about their plans beyond 2019. However, head coach Pat Shurmur made one thing clear: Eli Manning “is back.”

What Coach Shurmur Had To Say About Eli Manning

This is not the first time coach Shurmur has said to the press that he wants Manning back in 2019. But for the first time all offseason, we heard a definitive answer. Rather than saying he wants Eli back, Shurmur said “He’s back.” There is a big difference between the two.

Coach Shurmur is confident Eli can still compete at a high level. He does not blame Eli for the Giants’ 5-11 season. Shurmur thinks that if the rest of the team plays better, Eli will too.

â€œI think Eli can help us win games, and he proved, when the players around him started playing better, that he can play at a very high level and help us win games,â€ Shurmur said. â€œSo, yeah, at this point I want Eli back.â€ – Pat Shurmur

Despite this, Shurmur did not rule out the possibility of adding another quarterback to the roster in the offseason. The Giants will be doing their due diligence on the 2019 Draft Class to try to identify a franchise quarterback. In fact, Shurmur made it clear he has already started evaluating the top prospects at that position.

What Coach Shurmur Had To Say About 2019 Quarterback Prospects

Regarding Murray’s controversial height, Shurmur did not seem too unsettled by it.Â  He noted that Murray’s height did not seem to effect his ability to throw the ball in college. Shurmur pointed out a key statistic during his press conference: â€œFor a sub-6-foot player, he only had five balls batted down.” Shurmur is willing to look at quarterbacks of all shapes and sizes.

Both Shurmur and general manager Dave Gettleman floated the idea of a quarterback succession plan. They both made note of “the Kansas City Model.” What they were referring to was how the Chiefs groomed league MVP Patrick Mahomes. They drafted him in 2017, had him sit a full season and learn behind veteran Alex Smith, then promoted Mahomes to the starting quarterback job for 2018.

Mahomes went on to throw 50 touchdown passes and win league MVP while leading his team to the AFC Conference Championship game. The Giants would love to have similar success. If the Giants are confident in one of the 2019 Draft’s quarterbacks as a franchise guy, they will not hesitate to draft him and groom him behind Manning.