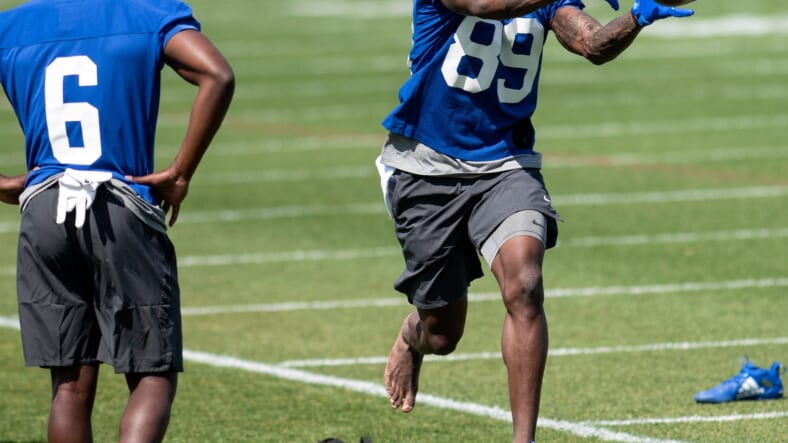 The New York Giants officially kick off the 2021 season today with the start of training camp. Absent from this week’s practices, though, will be the team’s first-round draft pick from this year’s draft, Kadarius Toney. The Giants placed Toney on the reserve/COVID-19 list after the rookie receiver tested positive for the virus upon his arrival to camp last Thursday.

Fans had strong reactions to the news of Toney’s positive COVID test. Kadarius Toney has barely gotten his feet wet in the NFL and has already missed numerous practices for personal reasons and now for a positive COVID test. In his first career practice, Kadarius practiced with one cleat due to an equipment mishap. He then skipped voluntary practices before being exempt from a mandatory practice due to a private personal matter.

That being said, Kadarius Toney has barely practiced with the Giants and some fans are concerned. There are even some fans going so far as to say that Toney is a “bust” or a “bad draft pick” despite the fact that he has yet to play a down of football in the NFL. Other fans are not as worried, and neither is New York Giants head coach Joe Judge.

Kadarius Toney is currently isolating and participating in meetings remotely after his positive COVID-19 test. Many questions have arisen regarding Kadarius Toney. One of the most interesting: Is he more interested in his rap career than the sport of football?

Head coach Joe Judge has an answer to that question. According to Joe Judge, Kadarius Toney “loves football.” Judge is not worried by the shaky start to Toney’s NFL career. When talking about his rookie wide receiver, Judge said Toney “goes hard when heâ€™s practicing. He plays hard.”

â€œThereâ€™s a lot of guys who are talented and they have some other things outside the building that distract them when they get in the building. We havenâ€™t seen that with him.” – Joe Judge on Kadarius Toney’s focus on football (via NY Daily News)

As for the many criticisms of Kadarius Toney, Joe Judge does not feel like the concerns are completely warranted. Judge went as far as to say that the concerns with Toney’s start to his career are being “overinflated.”

“He practices hard. So that to me is really the measuring stick of what it is. And I think there are a lot of things early in this guyâ€™s career that are, to be honest with you, being overinflated. It hasnâ€™t detracted from the actual football when heâ€™s involved with us.â€ – Joe Judge on the start of Kadarius Toney’s career via PFT

Kadarius Toney is back in the building

After testing positive for COVID-19 last week, Kadarius Toney is now officially back in the building. Many fans and writers alike were concerned with Toney and the shaky start that he has had to his career, despite head coach Joe Judge’s trust in his rookie receiver. Now, according to Joe Judge, Kadarius Toney is back in the Giants’ facility today for the start of training camp.

Joe Judge also made it clear that the Giants will waste no time getting Kadarius Toney back in action. The Giants will not be easing him into training camp because “the most dangerous thing you can do for a player is skimp on how you practice,” says Joe Judge.

“Whether that’s conditioning to get their bodies in the right position and build up the callous in their muscles… or practicing things like live hitting and live tackling. Anything they have to do in a game we want to make sure we practice, correct, repeat and practice again.” – Joe Judge on training camp conditioning

New York Giants fans will not have to wait long to see their electric first-round draft pick on the field. Kadarius Toney will be out there for the start of training camp. Joe Judge and the New York Giants will get Kadarius Toney on the field as soon as possible. Giants training camp kicks off today as fans eagerly anticipate the start of the 2021 NFL season.