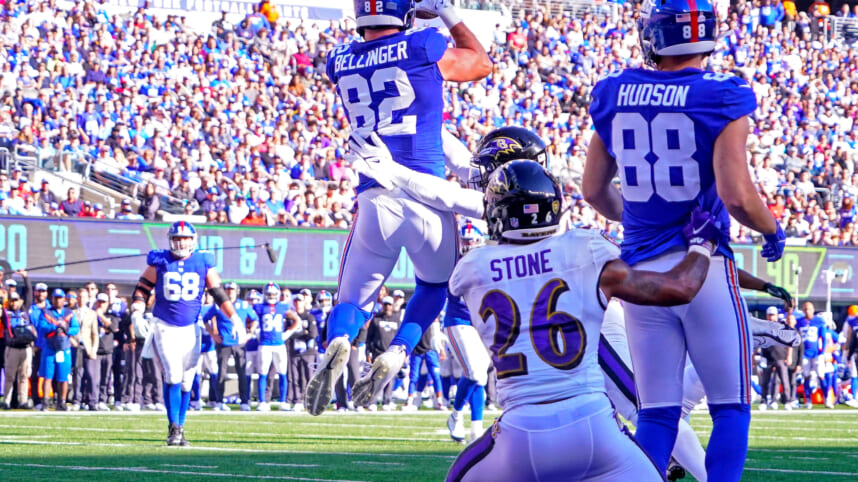 TE Daniel Bellinger is off to a fast start for New York Giants:

Bellinger caught a career-best of five catches in the game yesterday. All five targets that came his way he hauled in. He just missed putting together his best game in terms of receiving yardage. He concluded with 38 yards and one touchdown as well.

His touchdown reception was a tough play. Bellinger made an impressive contested catch down 10 with six minutes to go, over the middle in traffic.

Bellinger now has 15 catches, 139 yards, and two touchdowns receiving in his first six games as a Giant.

To go along with his rushing touchdown in the Green Bay Packers win, Bellinger has scored all three of his touchdowns in the red zone for the Giants. He is proving himself to be a force in that part of the field for the offense.

To add, Bellinger had arguably his best run-blocking game to date yesterday. The area has been a strong suit for the rookie, and he only built on it in Week 6. He earned a strong grade of 74.5 as a run blocker. His overall grade so far this year is even better from PFF, with a 75.9.

Tight end is a hard position to come in and make an immediate impact as a rookie. What Bellinger has provided certainly sparks optimism and makes him a promising piece to the Giants’ future.