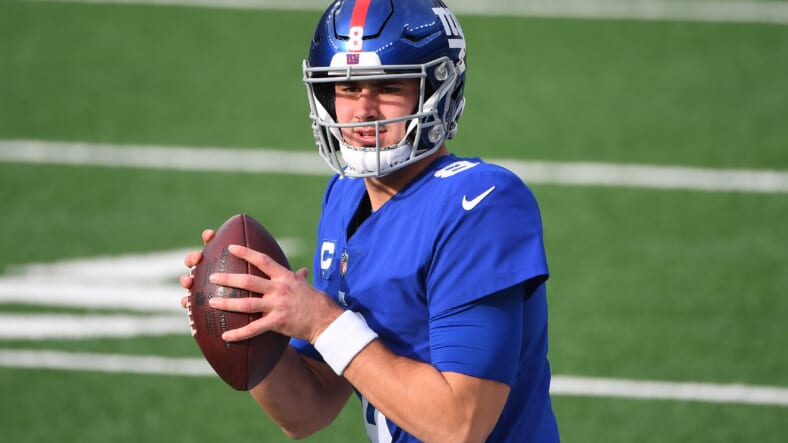 The New York Giants earned a clutch victory over the Philadelphia Eagles this weekend. The Giants improved to a 4-7 record with the 13-7 win at home against their division rivals. This was the Giants’ first game of the season without Jason Garrett, as they fired the offensive coordinator earlier that week. Freddie Kitchens assumed play-calling duties for the Giants, calling a winning game with Daniel Jones under center.

New York has been extremely conservative on offense this season. The expectation was that Freddie Kitchens would push the Giants’ offense downfield with more vertical passing concepts. However, that expectation did not become reality on Sunday, despite the Giants’ win.

Daniel Jones has not thrown the ball downfield much this season. Entering this week’s game,Â Daniel Jones had attempted 331 passes so far this season. Only 23 of those passes had traveled 20+ yards downfield. That is only 6.9% of Jonesâ€™s attempts, ranking 36th in the NFL. Comparatively, 13% of Jonesâ€™s passes had been thrown targeted behind the line of scrimmage. The Giants are throwing the ball backwards more often than they are throwing the ball deep.

That trend continued this weekend. Daniel Jones attempted 30 passes against the Eagles on Sunday. Only 1 of those passes traveled 20+ yards downfield. Six of his attempts (20%) were thrown behind the lines of scrimmage.

So, despite the change at offensive coordinator, the Giants are still dealing with the same struggles. They scored only 13 points on Sunday and almost never threw the ball downfield. As great as New York’s defense is, it will never be enough to take them deep in the playoff without getting some help from the team’s offense. The New York Giants need to start getting more aggressive on offense.