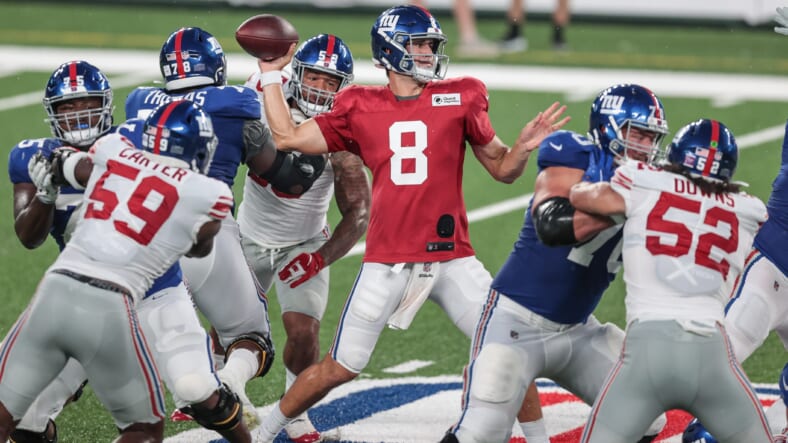 The New York Giants are set to open their preseason with a local rivalry against the Jets in only a couple of days, and we now have official announcement from Joe Judge that quarterback Daniel Jones will not appear.

Other notable names that will be absent include Lorenzo Carter and Saquon Barkley, who have both been ruled out. In the case of the latter two players, it looks like the decision was made because their recoveries from injury aren’t far enough along.

Of course, it won’t be a surprise to anyone that Barkley is sitting. It’s debatable whether he’ll even be ready for week one of the regular season, so most aren’t expecting to see Barkley suit up during the shortened preseason this year.

However, Daniel Jones might be more of a surprise absence as he has no injury and will head into the season as the team’s starter at the most important position.

Why is Jones sitting out the preseason opener?

Joe Judge explained a bit of his logic in keeping Jones out. It seems like Jones is being excluded so the Giants can get a better idea of the players behind him on the depth chart.

“I will say this, the priority for me is to treat this more like a traditional game four and when I say that, itâ€™s more of a make sure all of the players that we really have to evaluate get an evaluation. Because of the rules this year, we have to cut five guys after the Jets game. I want to make sure that we donâ€™t make any decisions that impact our or their future without a proper evaluation,” Judge told reporters on Thursday.

Jones’ absence means that Clayton Thorson and Mike Glennon will get more time on the field to compete for the backup job that Colt McCoy held last year. The position at stake may be a bigger deal than anyone can imagine right now.

After all, as recently as last year the Giants ended up relying on their backup when the offensive line couldn’t protect Jones and the QB was injured. There’s no telling if that will happen again, and the Giants have experience with neither backup starting a game.

The preseason has been shortened by one game to make room for the expanded regular season, so the Giants will have less time to make the kind of evaluations that Judge and the staff are looking for from this game.

With a lot of roster change this season and with the team signing some lesser known free agents who will fly under the radar, this evaluation game will probably have a fair amount of impact on the final cuts. And it may just help the Giants make the right decision in keeping a future breakout player on the roster. Even if it comes at the expense of the on the field result, it should be well worth it.