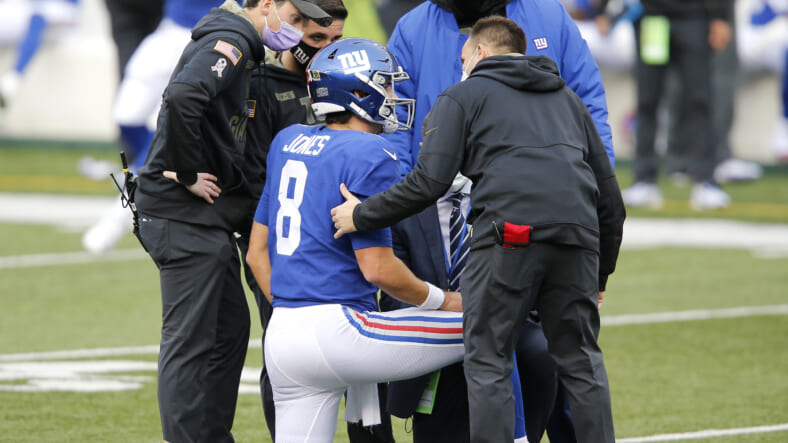 One of the biggest things that happened to the New York Giants last season was the Daniel Jones injury. The team only needed one more win to make it into the playoffs, and they may have been able to grab that win if they had regular starter Daniel Jones for the entire year. Instead, as we all know, the Giants had to rely on Colt McCoy in some late season games and, with the exception of the Seattle win, the results weren’t great.

However, Jones might have done well just to get back on the field after his injury at all. According to Joe Judge, the injury would have taken most players out for the year and Jones fought hard to appear on the field again – even if he did so in a less than capable state.

#Giants Joe Judge rarely talks injuries but just told @TMKSESPN that Daniel Jones’ hamstring injury was much more serious than people know and DJ let on. Says most players would have been out for the year. DJ earned a lot of respect in the building for the way he fought to return

“What I would say about the injury last year is it was much more serious than maybe people thought on the outside. I would say probably 90 percent of players in the league who would have had that injury, including quarterbacks, would have been on IR for the remainder of the year. Thatâ€™s just the reality of it,” Judge told ESPN 98.7FM.

“It was much more severe than maybe he allowed people to know or the information that was put out there, and weâ€™re going to protect our players by not disclosing everything about their injuries, to be honest with you,” Judge continued, adding that Jones won the respect of a lot of people.

If this is true, it might be worth giving Jones a break for not being able to come back in full last season. While his absence did hurt the team, it looks like it took quite a lot just for Jones to stay in the running.