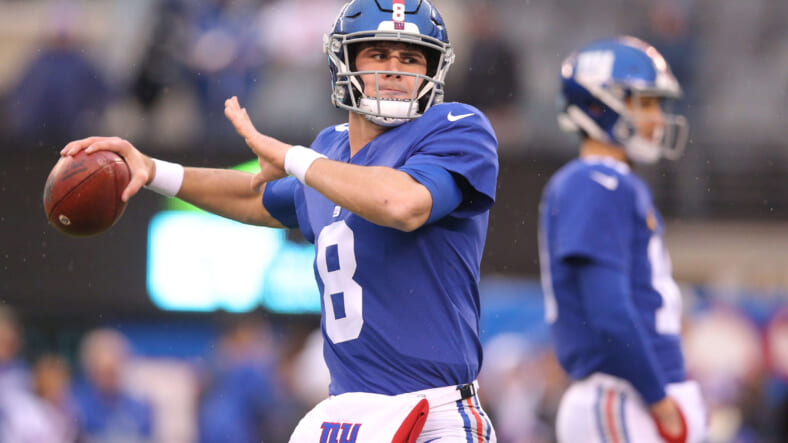 In case you didn’t believe the New York Giants were committed to Daniel Jones going forward, GM Dave Gettleman would confirm that once again while speaking on Tuesday. The Giants have expressed that Jones is their future multiple times, but since this is the offseason when roster moves are being made, it needed to be said one more time. And if you believe Gettleman here, there’s really no chance we end up with a different QB anytime soon.

Gettleman claims there’s no need to look at QBs

“We’ve done the evaluation on him and we really believe he’s the guy. No reason to go look,” Gettleman said, denying that the Giants might look at free agent quarterbacks. “What we’re doing isn’t fantasy football, we’re not playing, we’re not doing that. We’ve got a conviction on him, he’s everything we want, he’s got all the physical skills and again I say this all the time, the kid just finished his second year of NFL football.”

Gettleman stressed that it takes time and that most aren’t the best at their job after two years. He reaffirmed once again that the team believes in Daniel Jones.

But it remains to be seen how far out this order of things will last if Jones doesn’t make the big step forward that many are hoping for in 2021. He’ll have some advantages compared to 2020 if the Giants can do what everyone is hoping, and add better weapons to the offense this year. But as we saw with the team’s losing streak in the first half of last season, patience will wear thin quickly if that doesn’t bring quick results.

Still, it really looks like the Giants are unlikely to change course anytime soon, and they’ve practically said it themselves on a number of occasions, both head coach Joe Judge and GM Dave Gettleman. We’re going to have Daniel Jones as the QB for the future, whether or not the fans believe the Giants can win down the line with him.