New York Giants: Daniel Jones at Thursday practice, but does not participate 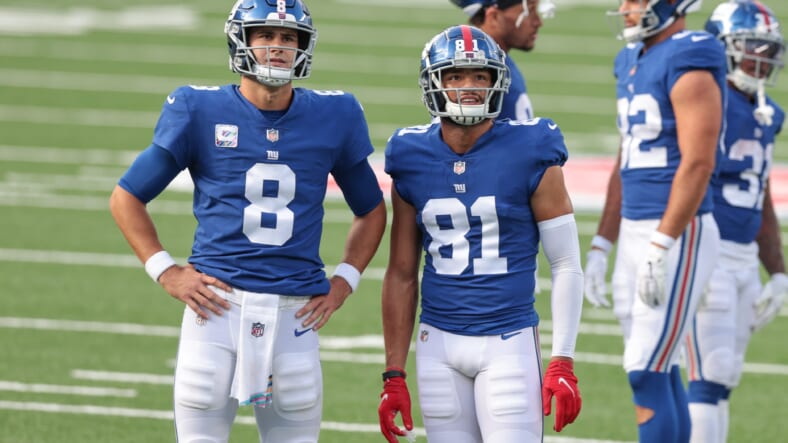 The New York Giants still aren’t sure whether Daniel Jones will be ready to play against the Seattle Seahawks on Sunday. He went down in the third quarter of their win against the Cincinnati Bengals last week, and while his hamstring is expected to recover quickly, it may not be quickly enough for Jones to take the field in a very important game. This game, of course, could decide the first place team in the NFC East as a win would allow the Giants to hold onto the spot.

Jones didn’t participate in practice on Wednesday and that trend continued on Thursday. However, there’s some reason to be optimistic as despite being listed as not participating, Jones was indeed present on the practice field on Thursday and worked with trainers.

From NFL Now: #Giants QB Daniel Jones was at practice, which is good. But he's got to improve a lot before he can play on Sunday. pic.twitter.com/NfPrZTSboI

The forecast isn’t looking great for getting Jones back in time for the Seahawks game. We’re already getting further into the week and even if Jones is almost fully recovered by Sunday, it’s starting to look like there will be limited days for him to actually get practice time in.

With just Friday and Saturday left for Jones to possibly practice, and with him likely being limited for one or both of those days, it looks like Colt McCoy is the most likely starter for the Giants. And that puts them in a precarious position going into a game with the 8-3 Seahawks, who are coming off a win against fellow NFC East contender Philadelphia.

But with the injury situation with Jones, the Giants may not have another option but to put their faith in McCoy – even if he didn’t look the sharpest coming into the game against the Bengals last Sunday.