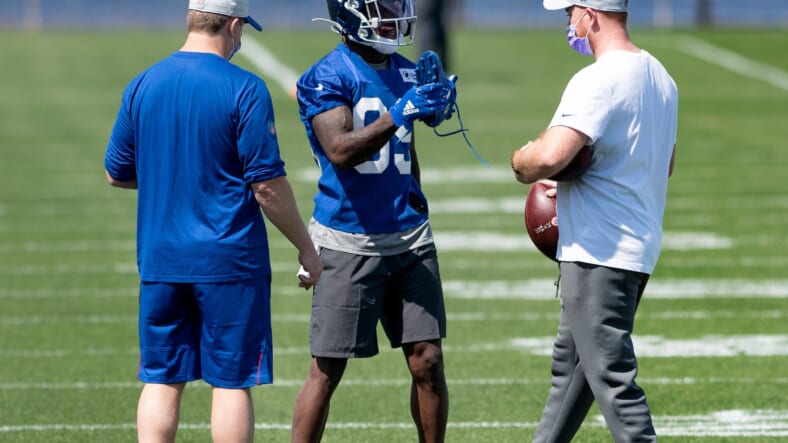 The New York Giants are currently enjoying a week of joint practices with the Cleveland Browns. The Giants and Browns will face off in a preseason Week Two matchup on Sunday night.

In their first preseason game, key members of the team were held out in an effort to keep them healthy for the start of the regular season. Players like Daniel Jones and Leonard Williams did not see the field on game day. Many of these key players will return to the field to start ramping up to game speed. But the Giants have already declared a number of key offensive players out for their second preseason game.

Kenny Golladay (hamstring), Kyle Rudolph (foot), Saquon Barkley (knee), and Kadarius Toney (unknown) will all be absent from the Giants’ lineup on Sunday.

When will these players return?

Daniel Jones and most of the starters on offense will take the field on Sunday. In the third preseason game versus the Patriots next weekend, Joe Judge wants the starters to play most of the first half. But will these injured players be back in time to create some chemistry in the preseason? Or will Golladay, Rudolph, Barkley, and Toney have to wait until the regular season to see some action?

At this point, it appears Kyle Rudolph will not be seeing the field until the regular season. In fact, it looks like it could be a long time before he suits up for the Giants. Rudolph does not seem close to returning and if he is not activated off of the PUP list by the start of the regular season, he will miss at least the first six weeks of the year.

Kenny Golladay is a player the Giants need healthy for the regular season. He suffered a hamstring tweak a few weeks ago and avoided the worst-case scenario, but he has not been a full participant in practice since the injury occurred. At this point, Golladay could be healthy enough to play next week, but it might be wise for the Giants to let him rest up and focus on the regular season.

Like Golladay, Saquon Barkley is an essential piece of the Giants’ offense. New York needs their superstar running back to get healthy. It is hard to imagine that the Giants would risk an injury to Barkley by playing him in the preseason considering the severity of the injury he is recovering from.

Kadarius Toney is a major question mark to this point. The rookie wide receiver has barely practiced with the team this summer and is now dealing with a mystery injury. The Giants say he is dealing with an injury but have not specified what the injury might be. At this point, no one knows when Toney will be recovered. All Giants fans can do is wait and hope to see Kadarius Toney on the field for the start of the regular season.