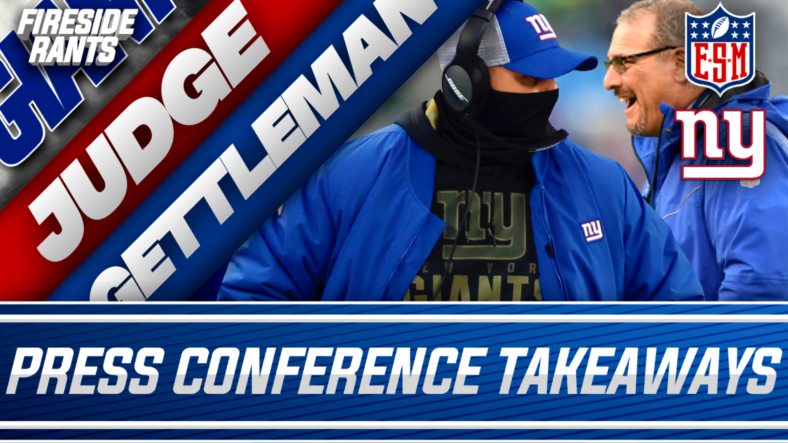 The New York Giants have a ton of moves to make in the near future, especially with the franchise tag deadline on March 9 at 4 PM and free agency starting on March 17.

With plenty of action to come over the next two weeks, head coach Joe Judge and general manager Dave Gettleman hosted a press conference to answer questions. The Giants have already made several moves, including the release of Golden Tate and David Mayo. The Giants have also restructured the contract of Levine Toilolo and are preparing to tag Leonard Williams.

With veteran RT Cam Fleming hitting free agency, the only serviceable player on the roster they can start at the position is Matt Peart, former 3rd round pick from the 2020 NFL draft. Gettleman affirmed that he would feel comfortable with Andrew Thomas and Peart starting at both tackle spots in 2021. He mentioned that the former UConn product showed enough and that he had some good reps last season before being diagnosed with COVID-19.

Gettleman said he's comfortable going into the season with Andrew Thomas and Matt Peart as the starting tackles, there's a BIG tip of the cap!

This could be a tip of the cap from Gettleman, but I am under the impression the Giants will roll with an extremely young offensive line 2021.

The Giants seem to be enamored with TE Evan Engram, who was a direct result of multiple turnovers in 2020 and dropped a multitude of passes. Head coach Joe Judge remained positive and confident arhat EE can bounce back in a big way moving forward. He detailed his work ethic and discipline to improvement, which is something that Judge loves to see in his players. If EE can alleviate those drops, thereâ€™s no question he can be one of the best receiving TEs in the NFL.

3.) Building through the draft

Successful teams donâ€™t build through free agency, they need to consistently draft well. That is something that Judge understands greatly and is focused on putting together a strong scouting department and phenomenal coaching staff to maximize their selections. With only a minimal amount of money this season, the Giants will undoubtedly have to rely on the 2021 NFL draft to solve some of their problems.

Joe Judge says he's focused on the long-term and building through the draft.

The Giants had their best draft class in 2020 in years IMO, thanks to Judge.

Really confident he's our guy long-term and if there's anything Gettleman did right, it's hiring this guy.