How should the New York Giants use Kadarius Toney moving forward? 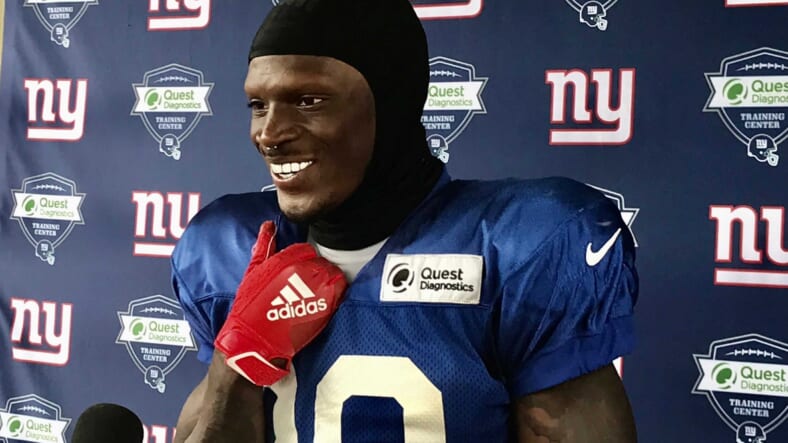 When the New York Giants drafted Kadarius Toney with the 20th overall pick, they added a versatile weapon on offense who could be used in many different creative ways. With gadget utilities and raw athleticism, Toney was one of the best receivers regarding missed tackles forced during his final year with Florida in 2020. He lead receivers in college last season with a 30% missed tackle rate, showcasing his strengths as he adapts to the NFL and finds his way into the Giantsâ€™ scheme.

However, the team has seldom used Toney, featuring him in just 24 offensive snaps through two weeks against Denver and Washington. He has only touched the football twice, both on design plays that failed to produce any positive gains.

The media quickly began to spin stories and rumors regarding his usage and the frustration that was boiling. Toney took to social media to express his emotions, later taking a shot at the media for starting a negative narrative.

Y’all try to turn anything into something, SMH ?????we good over here ?

However, the Giants are underutilizing Toney, who clearly could help on offense. Every teamâ€˜s first-round pick should have an instant impact unless you are developing a quarterback to take over for a veteran, in which case represents a different scenario. When drafting impact weapons on offense and skill position players, they need to be featured early and often to help them adjust to the physicality and speed of the game at the next level.

How the New York Giants can get Toney involved moving forward:

Toney is far more than just a gadget player, with solid route running and unique abilities in the open field. Some ways the Giants can get Toney more involved include using him as a punt returner and featuring him in bunch formations alongside Sterling Shepard in the interior. With Kenny Golladay also taking snaps from the slot, Toney could be pushed outside and supplement reps from Darius Slayton, who had a costly drop against Washington in Week 2, which ended up being the difference in the game.

Having dropped just four passes over four seasonsÂ with Florida, thereâ€™s no question he is a reliable target that can contribute toward a more efficient unit. Given the Giants scored just seven meaningful points in Week 1, they bounced back with a far more extensive and aggressive strategy against Washington, scoring 29 points. The Giants scored more than 29 points just once in 2020, so theyâ€™ve already gotten off to a decent start in context with Jason Garrettâ€™s vanilla scheme.

There are two reasons the Giants might be holding back from unleashing Kadarius:

First, he could be dealing with an injury and recovering from Covid, so they want to take a more cautious approach with his health. Alternatively, the Giants are still developing their scheme and adding new elements every week, so perfecting the base concepts and expanding that route tree could be more prevalent in the short term. With Toneyâ€™s unique skill set, they might be waiting to add his qualities at the right time when the offense has momentum, and theyâ€™ve begun stringing together consistent performances with their more established players.