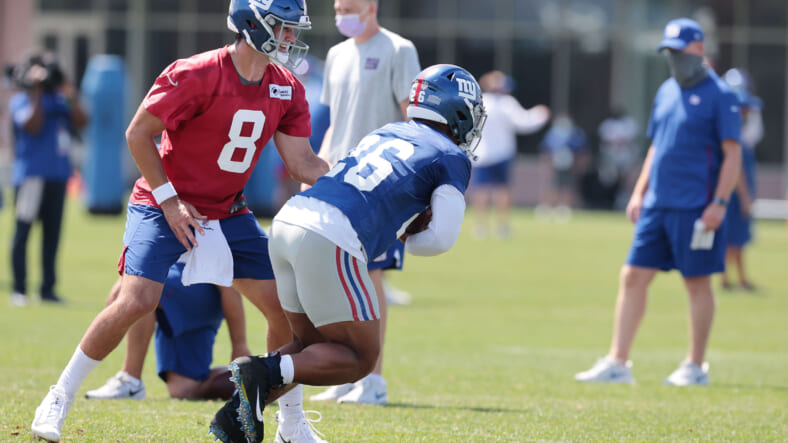 The New York Giants have made it a priority to inject the roster with high-quality people, let alone players. When they drafted Saquon Barkley second overall in 2018, they saw generational talent that coupled with a fantastic human being. Upgrading the roster also meant elevating the locker room and the leadership that quietly makes an impact behind the scenes.

While Barkley has been rehabilitating from a torn ACL, MCL, and partially torn meniscus, his spirits have been as high as ever. He spoke with Rich Eisen this past week, avoiding questions of his return and timetable for recovery, but was quick to rave about one of his teammates, quarterback Daniel Jones.

Jones had a bumpy start to his NFL career, showcasing his arm talent with 24 touchdowns in his rookie season before dropping to 11 this past year with a lack of playmakers and a debilitating hamstring injury.

The Duke product is hoping to take a step forward in the upcoming season after the Giants spent an egregious amount of funds to acquire Kenny Golladay in free agency and drafted Kadarius Toney with the 20th overall pick in the first round of the 2021 NFL draft.

Jonesâ€™s future success entirely relies on his protection scheme in the trenches, and the Giants didnâ€™t do much to upgrade the unit aside from hiring two new couches consultant Pat Flaherty and OL coach Rob Sale. The expectation is that their young players on the line will see an increase in efficiency, specifically in pass blocking. If that ends up being the case, Jones will reap the rewards, with more time in the pocket to spread the ball to his playmakers.

Of course, the return of Barkley will have an immediate impact, drawing more attention from defenders in the box and allowing Jones to operate without additional blitzers being sent his way. If thereâ€™s anything we can guarantee, it is that his work ethic has helped him improve in various categories, but until we see him apply his talents during live-action, itâ€™s all just hearsay.