Giants’ receiver corps set to change in Week 6 against Baltimore 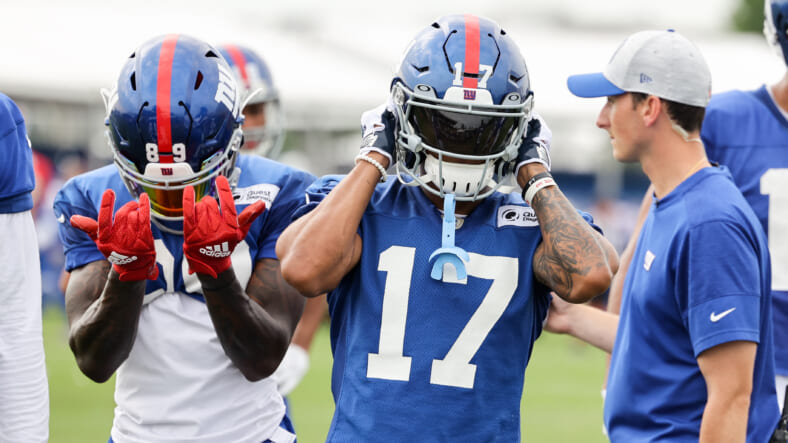 The New York Giants are gearing up for an extremely competitive Week 6 game against the Baltimore Ravens on Sunday afternoon. Coming off an impressive win against the Green Bay Packers, the Giants are riding high on confidence and have a good chance at overcoming a tough Baltimore team, considering their struggles against a bad Cincinnati Bengals squad last week.

The Giants have their secret ingredient to limit Lamar Jackson, defensive coordinator Wink Martindale, who spent years working opposite Jackson on the defensive side.

However, that task is easier said than done, and the Giants will have to produce on offense as well, outscoring a Ravens team that is averaging 27.6 points per game.

The Giants’ top receiver at this point in time is Darius Slayton, coming off a fantastic performance against the Packers in Week 5. He recorded six receptions for 79 yards, and those metrics could’ve been higher if he and Jones connected on a deep crosser that saw him wide-open.

Slayton was in the doghouse to start the season but worked his way back into the fold and is expected to be a significant part of the team’s game plan moving forward since head coach Brian Daboll values players who take advantage of opportunities.

The Giants have rolled out David Sills routinely over the past few weeks, and while he doesn’t offer the best option as a receiver, he exerts 100% effort and makes an impact as a run blocker on the outside.

The coaching staff would rather have a player that goes hard every single play than one that takes off at times, which is their beef with Kenny Golladay.

There is hope that Wan’Dale Robinson, the Giants’ second-round rookie, can feature against Baltimore on Sunday. Robinson felt good this week during practice, and barring any setbacks, he should be able to make his second appearance of the regular season.

Coming off an MCL sprain he sustained in Week 1 against the Tennessee Titans, the Giants have been taking his injury with caution, but it seems as if he’s finally ready to make a return.

The Giants have gotten a ton of value out of Richie James, despite his role diminishing the past two weeks or so. James features as the team’s punt returner and receiver, but he’s only tallied 25 total yards over his last two games combined.

His offensive snaps have decreased with the injection of Slayton, and he could see even less with the Giants’ offensive strategy focused on running the football and the return of Wan’Dale Robinson.