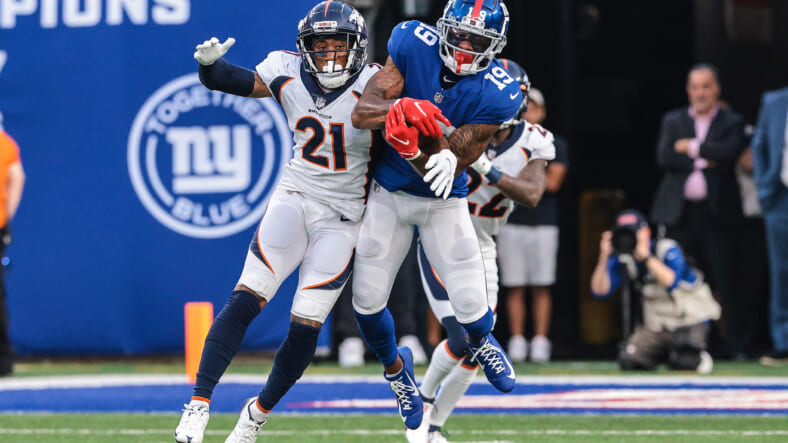 Ever since the New York Giants hired Jason Garrett to be their offensive coordinator, the unit has averaged a measly 17.3 points per game. Despite the additions of Kenny Golladay, Kyle Rudolph, Kadarius Toney, and the return of Saquon Barkley, the Giants managed just seven points during meaningful football on Sunday in Week 1. While the final score might say 13, garbage time provided the offense an opportunity to put more points on the scoreboard.

Given the embarrassing amount of riches the Giants have at their disposal, scoring seven points is malpractice. Garrett, who is an experienced coach from his time with the Dallas Cowboys, has hit a roadblock devising a unique scheme the focuses on vertical concepts and expanding upon his player’s strengths.

Despite seeing more of the same in Week 1 against the Denver Broncos, receiver Kenny Golladay is optimistic that the offense will turn a corner and provide more explosiveness moving forward.

“Iâ€™m sure I speak for everyone, we try to go into every game trying to be explosive, we want to make those explosive plays,” he said. “Of course Iâ€™m going to say I want myself and the rest of the guys on offense to come in with that mindset and dominate.”

Golladay stated before the game that the offense would be a little rusty, given the star receiver has been dealing with a hamstring injury that kept him out of the preseason and joint practices against both the Cleveland Browns and New England Patriots. Last season, Kenny played in just five games, dealing with a bevy of issues. Suffering an injury so early in the season certainly didnâ€™t brew optimism within the fan-base, but he is working his way back efficiently.

In the loss to Denver, Golladay hauled in four receptions for 64 yards on six targets. Interestingly, the majority of his targets came in garbage time in the fourth quarter when the game was already out of reach.

“We have to build from here and I feel like weâ€™ll do that,” Golladay said. “Just being able to get those balls from him in the game, that was good because then he could see a little bit of what I can do to help him and to help the team.”

Unless the offense can begin taking shots downfield and putting together more productive games, coordinator Jason Garrett will be on the hot seat sooner rather than later. In fact, after displaying one of the blandest and vanilla offensive schemes in the league last season, Garrett should already be feeling the pressure.

As ownership waits patiently for quarterback Daniel Jones to become a franchise signal collar, the fans are quickly entering panic mode. Joe Judge must get his ducks in a row and rebound against Washington, otherwise the ship will run aground rather quickly.