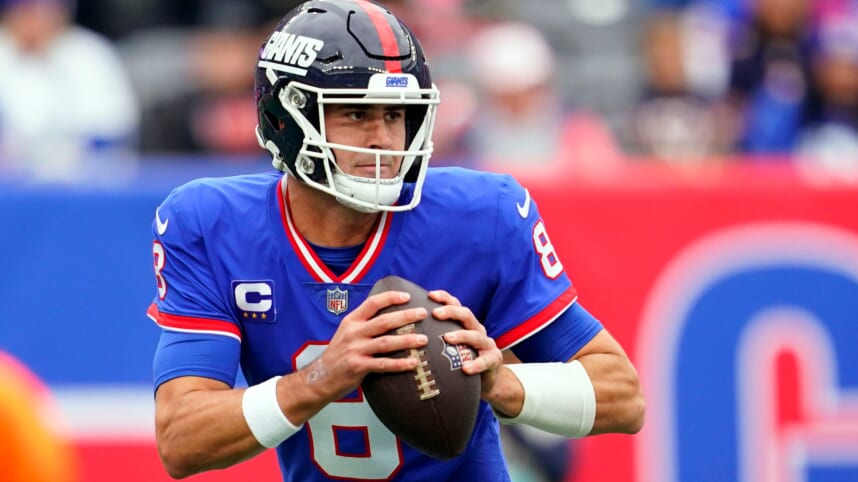 The New York Giants left Sunday’s game against the Chicago Bears with a massive list of injuries, headlined by quarterbacks Daniel Jones and Tyrod Taylor.

Jones sustained a left ankle injury that was heavily wrapped and causing him to limp. Head coach Brian Daboll stated after the game that Jones wanted to go back in, but he preferred to remain cautious and protect his quarterback’s health rather than potentially aggravate an injury that could keep them out for a substantial amount of time.

With that logic in mind, Daboll brought in Taylor to help soften the blow. Within just a few minutes, Taylor dove headfirst into a defender, sustaining an apparent concussion. However, on Monday, Daboll spoke about their progress, and it seemed as if Jones may have dodged a bullet.

The New York Giants expect to have Daniel Jones available in Week 5:

Jones was reportedly feeling better on Monday after limping due to the ankle injury just one day before. Jones finished the game with 71 passing yards and 68 yards on the ground with two rushing touchdowns.

The Giants have been unable to rely on their receivers lately, given the lack of talent and injuries. Even Kenny Golladay sustained a knee issue in the win on Sunday, further stripping the team of adequate talent.

Currently, it seems as if David sills and Richie James are the prominent receivers, with Wan’Dale Robinson and Kadarius Toney also missing time due to individual ailments.

As for Taylor, he is going through the concussion protocols to make sure he is cleared before participating in any football activities. In addition, safety Julian Love also sustained a potential concussion, going through protocols himself this week.

With a Week 5 game in London against the Green Bay Packers coming up, it seems as if the Giants may be extremely thin at multiple positions. That is justifiable enough to bring in support this week, which is why old friend Landon Collins came for a visit on Monday as a potential signing to help bolster the defensive unit. The Giants’ HC also mentioned that they would work out Collins along with a few other players to gauge their value.