Eli Manning: ‘I got out at the right time’ 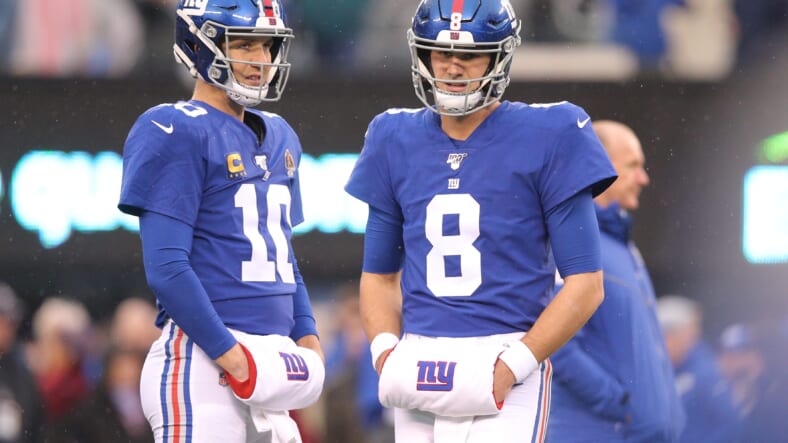 Eli Manning played in 236 games for the New York Giants, the most in franchise history. He started at quarterback in 234 of those games.

As a rookie in 2004, Manning played in nine games, starting the final seven and it wasn’t until 222 games later when an ill-advised benching by Ben McAdoo in 2017 finally sent him to the bench. That didn’t last long after public outcry. Manning started the next 22 games under center before giving way to his successor, Daniel Jones, in Week 3 last season.

Does Manning miss playing? Not really.

“I had my run,” Manning said in a recent interview with ESPN. “Had an unbelievable career, whether it be from high school to college football and the NFL. I don’t have regrets. I got out at the right time. I’m kind of just at peace with it….I haven’t picked up a football. I think it’s harder for people when they retire to kind of get retired. They still want to play and nobody wants them to play. They’re still working out and still hopeful. Mine is, I’m done and I’ve now thrown a football one time after Dec. 29 or whenever that last game was.”

Jones was selected by the Giants because he has many of the same traits as Manning. He is simply a younger, more agile version of Manning, who was asked if he keeps in teach with his young protege.

“I sent him a text kind of a week before the season just saying, ‘Hey, I’m rooting for you,'” Manning said. “I want to be a resource for him if he needs anything, but I’m not going to try to be overly involved in anything as well. There is a little bit of trying to feel it out for yourself and just learning your style, whether it’s as a leader, quarterback or New York….Everything is different this year with the restrictions going on. [I] definitely stay in touch with him and send him texts of encouragement and let him know I’m rooting for him.”

Jones will need more than Manning rooting for him. He’ll need for GM Dave Gettleman to be right about this offensive line, for Joe Judge to work some magic and for Saquon Barkley to come back better than ever in 2021.