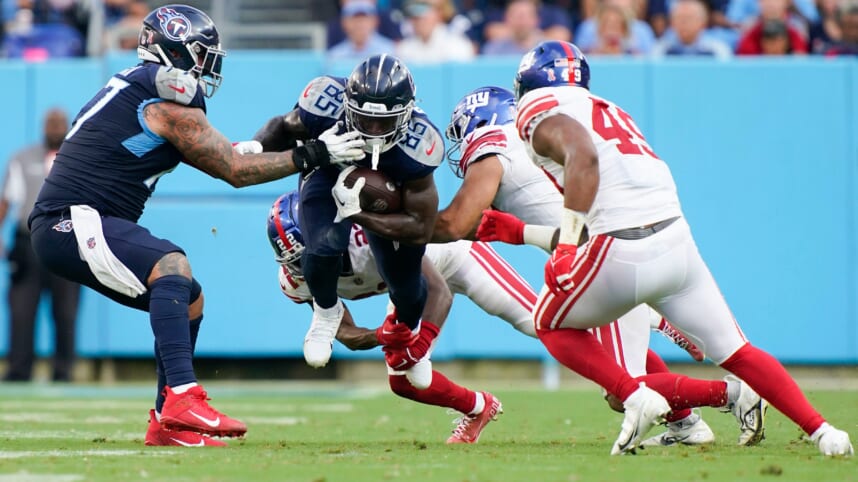 The New York Giants are coming off an improbable win over the Tennessee Titans, a playoff-contending team, in Week 1 of the 2022 regular season. After falling behind 13–0 at halftime, head coach Brian Daboll made a few genius halftime adjustments.

Focusing on big chunk plays downfield and exposing coverage flaws in Tennessee’s defense, the Giants were able to not only execute on a few deep balls but run Saquon Barkley hard to produce yardage. Barkley finished with 194 yards of total offense, including a touchdown and two-point conversion.

On the defensive side, the Giants’ game plan was simple, put pressure on the quarterback Ryan Tannehill and stop Derrick Henry from taking over. The Titans have a lackluster wide receiver unit led by rookie Treylon Burks, but the Carolina Panthers offer an entirely different beast.

With starting cornerback Aaron Robinson expected to miss a few weeks after having his appendix removed, the Giants are immediately short at a position they have next to no depth at. It will undoubtedly cause some issues in the secondary, so the Giants will have to adjust with more creative blitz concepts.

Stopping Christian McCaffrey is easier said than done, but the Browns shut him down in Week 1, a difficult task to achieve. He finished with just 33 yards on the ground over 10 carries, but hauled in four receptions for 24 yards in addition.

With awful coverage linebackers, the Giants will have a difficult time stopping McCaffrey in the receiving game unless they play more 3-safety sets. If the Giants plan to continue with their heavy man coverage style, they cannot trust Tae Crowder or Austin Calitro to man up on McCaffrey. It is possible they ask strong safety Julian Love to contain him in coverage, but even then, it is a difficult task.

Carolina’s top receiver in Week 1 was Robbie Anderson, who hauled in five receptions for 102 yards and a touchdown. Given the Giants will likely utilize Adoree Jackson on DJ Moore, Anderson will have a better opportunity against a reserve defensive back. It’s possible they man-up Darnay Holmes on Moore, moving Jackson to Anderson.

The projection at this point is that practice squad corner Fabian Moreau will get called up to feature at CB2, but given he was crushed last season for over 500 yards and seven scores, Anderson might have his way with the veteran corner (which may suggest Adoree flips over).

Starting free safety Xavier McKinney will have to step up and offer elite-level play to cover the defensive backfield, especially since Anderson is a go-route specialist.

One of Carolina’s more dynamic playmakers is DJ Moore, who finished Week 1 with four receptions and 24 yards. He also enjoyed a carry for 7 yards.

The Browns stifled Moore for the most part, but he could get involved against the Giants, especially given his versatility. Moore spent 17.1% of his snaps in the slot and 82.9% out wide last week, indicating he will feature on the boundary primarily. That will most likely indicate Jackson or whoever starts at CB2 will be responsible for him.

Baker Mayfield will likely look in the direction of McCaffrey and Anderson more often, but I wouldn’t rule out the 25-year-old receiver as an impact player at any given point in the game.