What does Jennifer Maia have to do at UFC 255 to pull the upset? 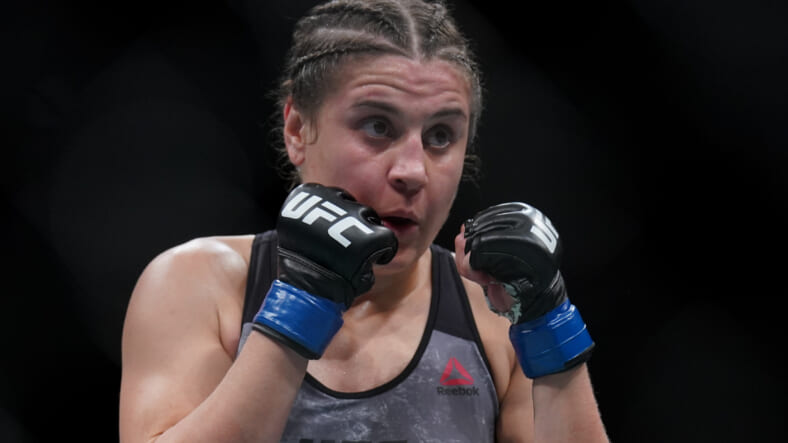 Saturday night at UFC 255, Jennifer Maia (18-6-1) has the biggest opportunity of her career in front of her. She will be taking on the undisputed queen of the flyweight division in Valentina Shevchenko (19-3).

Shevchenko is one of the very best fighters in the world. Two of her three career losses have come to UFC two-division champion, Amanda Nunes. However, many people believe that Shevchenko won the second matchup with Nunes.

The UFC created the flyweight division and she has reigned supreme at 125 pounds. Shevchenko hasn’t even been challenged really at flyweight. She is the total package and is a matchup nightmare for anyone in the division.

For that reason, Jennifer Maia is a massive underdog on Saturday evening. However, Maia possesses a very good skillset and she shouldn’t be counted out. The former Invicta champion certainly has the confidence she needs to pull off the upset.

Back in August, Jennifer Maia took on JoJo Calderwood. Calderwood was supposed to get a UFC title shot back in June, but Shevchenko injured her knee. Instead of waiting around, Calderwood took a fight to remain active.

Maia was coming off of a loss to Katlyn Chookagian and many viewed the fight as a tune-up for Calderwood. Sure, Maia was a tough opponent, but the general assumption was that Calderwood would do what she needed to do.

That didn’t happen. Maia was very impressive on her feet then used her great Jiu Jitsu skills to submit Calderwood in the first round. After the fight was over, Maia was given the next shot at the UFC flyweight title.

So how does Maia have a chance on Saturday? While Maia looked good on her feet against Calderwood, she should have no illusions about trying to strike with Shevchenko. If she tries to keep the fight standing, I think she’ll get lit up like a Christmas tree.

If Maia wants to dethrone the UFC‘s flyweight queen, she has to get it done on the mat. However, Shevchenko has proved that the ground is no picnic with her. The odds are lopsided for a reason, but in a fight, anything can happen.