Vicente Luque submits Michael Chiesa in the first at UFC 265 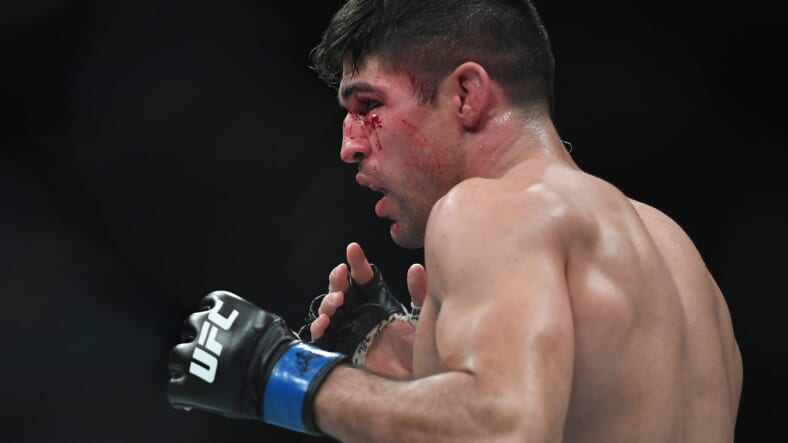 On the main card of UFC 265, we saw a pivotal matchup in the welterweight division. The fifth and sixth ranked welterweights went head-to-head as Michael Chiesa (18-4) took on Vicente LuqueÂ (20-7-1).

Luque was looking to pick up his fourth consecutive win at UFCÂ 265. Luque has been fighting with the promotion since 2015 and heâ€™s consistently been one of the best. After losing hisÂ UFCÂ debut, heâ€™s gone 13-2.

Standing across from Luque was Michael Chiesa. Chiesa has completely changed his career after moving to the welterweight division. For years, Chiesa struggled to get down to lightweight. Eventually, he decided to move up to his natural weight class of 170 pounds.

Since making that move, Chiesa has been sensational. Heâ€™s gone 4-0 in theÂ UFCâ€˜s welterweight division. Back in January he had a dominant five-round victory over Neil Magny to setup this fight with Vicente Luque.

The UFC 265 welterweight contest kicked off with a touch of the gloves. Chiesa circled on the outside as Luque pushed forward with pressure to start. Both men flick out jabs to start their striking.

Another beautiful 1-2 from Chiesa and Luque is busted open. Luque lands a leg kick that buckles Chiesa. Chiesa shoots deep on a takedown and he gets it. Doesn’t take long before Chiesa gets the back of Luque.

Chiesa is close to getting a choke, but Luque powers through. A scramble and Luque ends up on top. Out of no where, Luque locks in a d’arce choke and it’s deep. Chiesa tries to fight it, but he’s forced to tap. Huge win at UFC 265 for Vicente Luque.