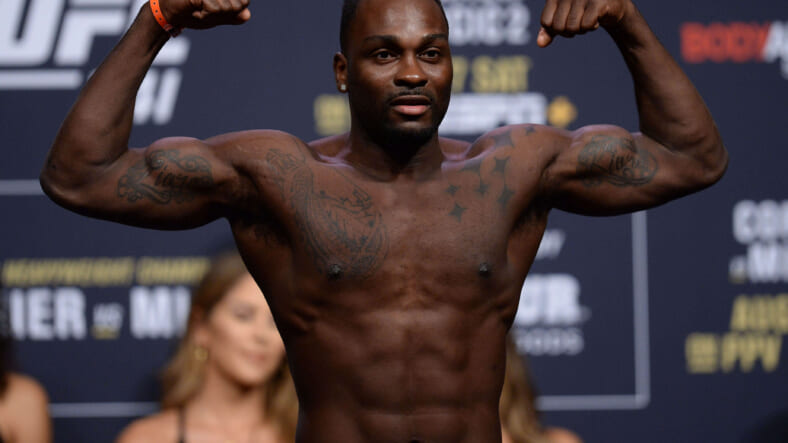 The UFC made their Las Vegas return tonight. Headlining the first card back in the United States was a middleweight contest between Edmen Shahbazyan (11-0) and Derek Brunson (20-7). UFC Vegas 5 was highly anticipated and it didn’t disappoint.

As the first round started both men were just feeling the other out. Brunson started the action with a couple of kicks. Shahbazyan landed a crisp right which Brunson countered with a body kick.

Brunson looked incredibly patient to start looking for his openings. Brunson shot forward with a couple of big shots and landed a takedown. Shahbazyan was able to work his way back up to his feet but ate some big shots.

Shahbazyan started throw massive shots which opened the eyes of Brunson. Brunson remained patient almost seeming to fight in slow motion at times. Shahbazyan threw a knee that Brunson used to clinch him. Close first round that I give to Shahbazyan.

Brunson opened the second round with a leg kick but Shahbazyan landed a massive body kick to counter. Shahbazyan looked to be going more to the body in the second.

Brunson started really looking to grapple early on in the second round. Shahbazyan landed another massive body kick and a couple of shots. Brunson then landed some big shots of his own before trying for another takedown.

In the final round, Brunson immediately pressed forward landing big shots. Shahbazyan crumbled. Herb Dean called a stop to the action after Shahbazyan showed nothing. Statement win for Derek Brunson.

Jennifer Maia Armbars her way to a UFC title shot

The co-main event of the evening featured a women’s flyweight contest between Joanne “JoJo” Calderwood (14-4) and Jennifer Maia (17-6-1). Calderwood elected to stay active against Maia despite having a UFC title shot guaranteed once Valentina Shevchenko heals.

As the fight started, Calderwood immediately started looking for kicks. Maia was pushing forward looking for big 1-2’s. Maia started landing some big shots early on. Calderwood took a couple of clean shots down the middle that got her attention.

Maia was finding a home for her right hand a ton in the first two minutes. Calderwood kept looking for kicks to keep the distance and score points. Calderwood caught a kick from Maia and used it to take the fight to the ground.

Maia looked for some submissions off of her back, but couldn’t get anything to stick at first. Calderwood just looked content to hold top position. Out of no where, Maia throws up an armbar. She locked it in and Calderwood was forced to tap.

Crushing defeat for Calderwood who was supposed to fight for the title in June. With that win, Maia will likely be next for the champion. In fact, the champ had something to say about her win.

Vicious knee leads to a finish for Vicente Luque

The third fight of the main card had fight of the night written all over it. The UFC paired welterweights Vicente Luque (18-7-1) against Randy Brown (12-3).

Early on in the first round, Luque landed a massive leg kick that got Brown’s attention. Luque continued to spin Brown around with a couple of additional calf kicks early. Brown started landing a crisp jab that reddened the nose of Luque.

Luque continued to pepper the lead leg of Brown with inside and outside calf kicks. Brown stepped in but was met with a massive right that floored him from Luque. Luque let Brown back up to his feet with about two minutes left.

Brown seemed to get his feet back under him and started landing jabs again. Luque was just stalking Brown near the end of the round. Brown was rocked again which forced him to shoot for a takedown. The round ends and it was a clear one for Luque.

As the second round started, Brown landed a massive body kick to start things. Brown looked more comfortable to start the second landing some decent combinations off the jab. Luque dropped Brown with a calf kick about a minute into the round.

Luque allowed Brown to get right back up. Brown tried firing off his jab to keep Luque off of him. Luque continued to plot forward just stalking Randy Brown. Brown did start to gain momentum back with some good knees in the clinch.

With about a minute left in the round, Brown got a big takedown into side control. However, Luque was able to get right back up. Luque clinched up with Brown and landed a massive knee that floored Brown. A few follow up shots ended the fight. Great finish for Vicente Luque.

Both men were talking before the fight even started. They both took the center and immediately started trying to figure out their range. Green looked really smooth in the opening minute evading shots and landing some good counters.

Both men stepped forward with big shots and Green hit the deck for a just a second after a massive right from Vannata. Green was able to bounce back quickly. About a minute later, after hitting the deck himself, Green dropped Vannata with a massive right of his own.

Vannata worked his way back up to the feet and the two men resumed their stand up fight. Both fighters seemed to rock each other in a big exchange towards the end of the round. Very fun first round that I give to King Bobby Green.

Green took the center to start round two and landed a stiff jab. Vannata tried for a takedown thirty seconds in, but couldn’t land it. These two could not stop talking to each other in the cage.

Vannata started showing some real damage on his nose from the stiff straight shots from Green. Green continued to pepper Vannata with jabs. Vannata landed a couple of clean shots which forced a Green takedown attempt. Vannata pulled guard for a guillotine but couldn’t secure it.

The two ended up back on their feet with about two minutes left in the round. Green started pepping Vannata again with straight shots. Vannata shot for a takedown and was able to get it near the end of the round. Despite the takedown, Green still landed the bigger shots. Another round for Bobby Green.

Both men started the final round with a big high five. The two started exchanging immediately and Vannata seemed to land a shot that wobbled Green. They clinched and started throwing bombs at each other.

Halfway through the round, Green shot in for a takedown and was able to get Vannata down. Green landed some pretty decent elbows from the top position. Vannata worked his way up with about a minute and a half left.

Vannata tried to push forward for the last minute, but Green seemed a step ahead. Green put on a great performance and takes the final round and the fight on my scorecard 30-27. The judges agreed giving the fight to Green unanimously (30-26, 30-27, 30-27).

The UFC returned to Vegas but didn’t do it without some adversity. There were fights cancelled to undisclosed reasons, COVID, and a fighter fainted before making the walk. Despite that the night delivered with some solid fights.

Jennifer Maia to me was the star of the night. Weeks ago she was just another top ten UFC flyweight and now she’s the likely number one contender.

Tonight also proved that Edmen Shahbazyan is not quite ready for the top competition in the UFC’s middleweight division. He looked completely lost after he couldn’t finish the fight in the first round.