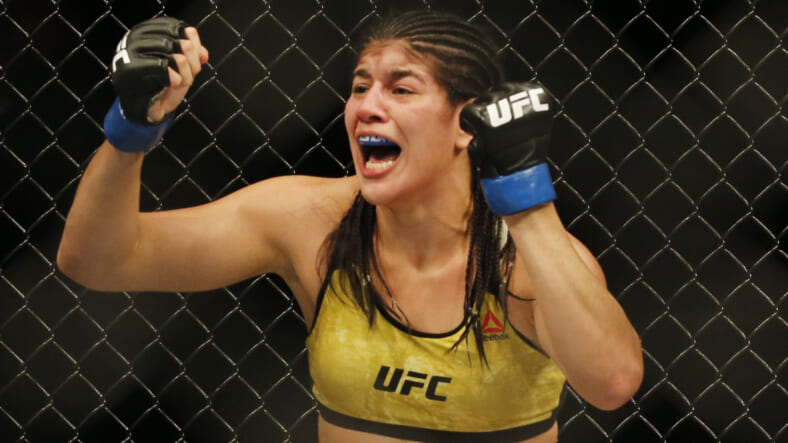 Vieira’s UFC career started out very strong. She made her octagon debut back in 2016 and she started out her UFC career 4-0. It wasn’t just started out 4-0, but it was the fact that she had wins over bantamweights like Sara McMann and Cat Zingano. At one point, Vieira was the second ranked bantamweight in the UFC.

Vieira is a black belt in jiu jitsu as well as judo. She’s very good on the ground and she is very good in the clinch. Vieira loves to strike and she has very good power. However, she can be a little too wild with her striking at times.

Standing across from Vieira tomorrow night is Yana Kunitskaya. Kunitskaya made her UFC debut back in 2018 and she’s gone 3-2 so far inside the octagon. However, her two losses came against Aspen Ladd and Cris Cyborg. However, she’s represented herself well in all her fights.

Kunitskaya has a very decent all around game. She has good striking and she has very good top pressure. There are a number of things that Kunitskaya does well that can cause problems for Vieira tomorrow night.

For Kunitskaya to be successful at UFC Vegas 19, she’s going to have to keep this fight standing. As mentioned, Kunitskaya does have good grappling and good top control. However, she’s going to be at a disadvantage in this one. Vieira is very strong in both of those positions.

When it comes to a prediction for UFC Vegas 19, I really like Ketlen Vieira. While Kunitskaya is very good, I don’t think she has the power to keep Vieira off of her tomorrow. While I’m expecting Kunitskaya to have some success, I just don’t see her keeping this fight on the feet. With that, I think Vieira is getting her hand raised tomorrow.