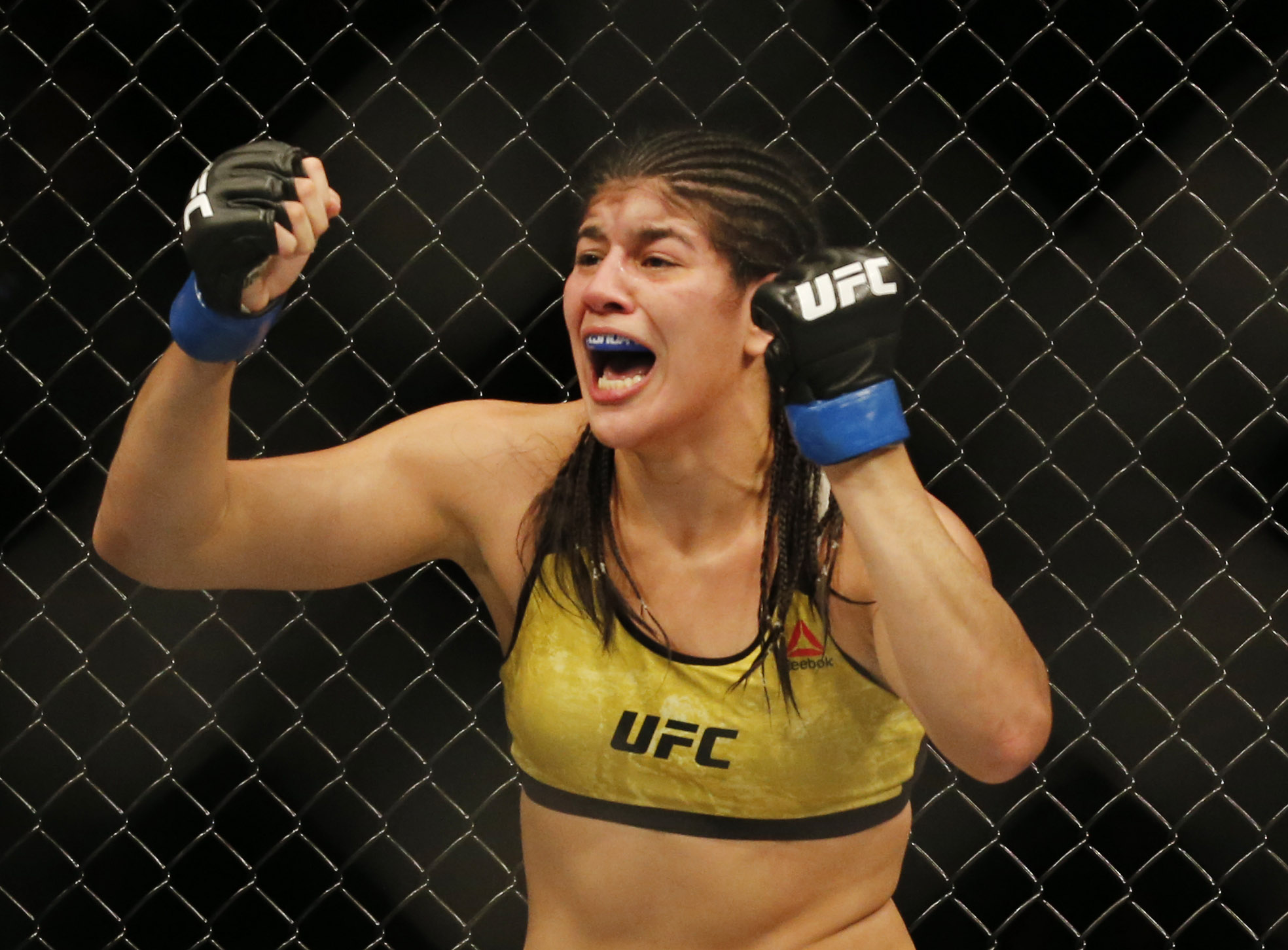 Vieira’s UFC career started out very strong. She made her octagon debut back in 2016 and she started out her UFC career 4-0. It wasn’t just started out 4-0, but it was the fact that she had wins over bantamweights like Sara McMann and Cat Zingano. At one point, Vieira was the second ranked bantamweight in the UFC.

Vieira is a black belt in jiu jitsu as well as judo. She’s very good on the ground and she is very good in the clinch. Vieira loves to strike and she has very good power. However, she can be a little too wild with her striking at times.

Standing across from Vieira tomorrow night is Yana Kunitskaya. Kunitskaya made her UFC debut back in 2018 and she’s gone 3-2 so far inside the octagon. However, her two losses came against Aspen Ladd and Cris Cyborg. However, she’s represented herself well in all her fights.

Kunitskaya has a very decent all around game. She has good striking and she has very good top pressure. There are a number of things that Kunitskaya does well that can cause problems for Vieira tomorrow night.

For Kunitskaya to be successful at UFC Vegas 19, she’s going to have to keep this fight standing. As mentioned, Kunitskaya does have good grappling and good top control. However, she’s going to be at a disadvantage in this one. Vieira is very strong in both of those positions.

When it comes to a prediction for UFC Vegas 19, I really like Ketlen Vieira. While Kunitskaya is very good, I don’t think she has the power to keep Vieira off of her tomorrow. While I’m expecting Kunitskaya to have some success, I just don’t see her keeping this fight on the feet. With that, I think Vieira is getting her hand raised tomorrow.

The UFC will host another Fight Night from the APEX tomorrow night. In the main event of the evening, The Black Beast, Derrick Lewis (23-7), takes on Alexey Oleynik (59-13-1) in a heavyweight battle. Lets take a look at the main card for UFC Vegas 6.

Lewis & Oleynik going for 3 straight in the UFC

One of the most entertaining fighters in the UFC is back as The Black Beast returns tomorrow night. Lewis is entertaining for his fighting style and his one of a kind post-fight interviews.

Lewis is one of the most powerful punchers in the heavyweight division. He’s the kind of guy who’s going to try to remove your head when he hits you. Over his career, Lewis has wins over Alexander Volkov, Francis Ngannou, Travis Brown, Roy Nelson, and I could go on.

Lewis was able to get a title shot in late 2018 after winning three fights in a row. He was stopped due to Daniel Cormier’s heavy wrestling attack. After that, he lost to JDS, but has since bounced back with back-to-back wins.

Oleynik also comes into this fight after winning back-to-back fights. Oleynik is looking to get his 60th professional win tomorrow night which is truly incredible.

The Boa Constrictor is the perfect name for Oleynik. He’s going to look to get this fight to the ground so he can choke Lewis. Out of 59 wins, 46 of them have come via submission over Oleynik’s career.

Now, we have seen Oleynik get finished recently. Before his two straight wins, he was knocked out in the first round by Walt Harris and Alistair Overeem.

Oleynik’s only chance in this fight is to get the fight to the ground, and I’m not sure he has the wrestling to get Lewis down. If he can get top position somehow, he can easily win this fight by submission.

However, I think Lewis is going to have his way on the feet. I expect something big to land early, and I expect that we will get another classic Derrick Lewis post-fight interview.

Prediction: Derrick Lewis by TKO – Round 1

In the co-main event of the evening we have a middleweight contest between the former UFC middleweight champion, Chris Weidman (14-5) and Omari Akhmedov (20-4-1).

For Weidman, this is a massive fight for his career. The former champion enters the cage after going 1-5 in his last six fights. All five of those losses have seen him get knocked out. The one fight he won, he also got dropped by Kelvin Gastelum.

A few years ago, Weidman was considered one of the pound for pound best. He had good wrestling, he was good on the ground, and he had solid striking with good power. However, the last five years have left us wondering just how good he really was.

Weidman moved up to light heavyweight late last year to try something new and was quickly knocked out by Dominick Reyes. This fight is truly a make or break fight for the All-American.

Akhmedov has quietly put together a very impressive resume over the last four years. He’s going 5-0-1 with wins over guys like Ian Heinisch and Tim Boetsch. Akhmedov might not be the most exciting fighter, but he’s very effective.

This is a fight where I’m really not sure what to expect. This fight is not going to be thrilling on the feet, and I think we might see a couple of stalemates in the grappling exchanges.

To me, this is truly a toss-up. I think this will be probably the most underwhelming fight on the main card. I think it’s close because neither man dominates, but I’ll go out on a slight edge and say Weidman will get a split decision here.

The third fight of the UFC Vegas 6 main card features middleweights Darren Stewart (11-5, 1 NC) and Maki Pitolo (13-5). If you’re wanting a stand up battle tomorrow night, look no further than this fight.

Stewart enters the octagon after going 4-2 in his last six fights. The biggest name he fought was Edmen Shahbazyan and the fight was very close. Stewart performed very well there.

Stewart is one of the more powerful guys in the division. He pushes forward with big shots and he usually starts very fast. He didn’t look great in his last fight against Bartosz Fabinski, but fortunately, Stewart is fighting someone who’s going to try and wrestle him.

Coconut Bombz, Maki Pitolo, is coming off of a knockout win over Charles Byrd back at UFC 250. Pitolo will enter the cage 4-1 in his last five fights.

Like Stewart, Pitolo is the type of guy who is going to stand and bang. He’s going to throw big power at you. If this fight has a finish, I think Pitolo is going to get it done.

However, I’m not sure the fight will get finished. If Stewart can stay patient and not be drawn into a brawl, I think he can win this fight on the scorecards. However, if it turns into brawl mode, he might get hurt.

The second fight of the main card features a UFC women’s bantamweight contest between Julija Stoliarenko (9-3-2) and Yana Kunitskaya (12-5, 1 NC).

Kunitskaya has had an interesting run in the UFC so far. She got the pleasure of debuting against Cris Cyborg. Predictably, she was finished in the first round. She then won back-to-back fights before fighting Aspen Ladd.

Kunitskaya was finished in the third round of that fight. 2-2 in the octagon so far but the two losses were to top competition. The former Invicta bantamweight champion has a pretty solid overall game.

She has good wrestling and she’s skilled on the feet. She’s going to bring a diverse striking attack to Stoliarenko. I really like Kunitskaya’s kicks and I think those could be key in this matchup.

Stoliarenko is a submission specialist that’s only lost once since 2016. That fight came against Leah Letson at the Ultimate Fighter finale back in 2018. Stoliarenko competed and lost on the show as well.

Out of nine professional wins, eight of them have come via armbar. When the fight hits the mat, there’s no questioning what Stoliarenko is looking to do. On the feet, she can hold her own, but will definitely be at a disadvantage here.

I think this is a tough matchup for Stoliarenko. If the fight hits the ground, she’s very capable of pulling off a submission victory, but I think we are going to see these ladies stand most of the fight which really favors Kunitskaya.

The UFC Vegas 6 main card kicks off with a lightweight contest between Beneil Dariush (18-4-1) and Scott Holtzman (14-3). Both guys will make the walk tomorrow carrying multiple fight winning streaks.

Dariush will enter the octagon riding a four fight winning streak. Quietly, Dariush has been one of the better fighters at lightweight for a long time, but due to the stacked nature of the division, he’s a guy who flies under the radar.

Dariush is really good wherever the fight goes. Great on the ground and fluid on his feet. He hold wins over guys like Jim Miller, Michael Johnson, James Vick, Drew Dober and Drakkar Klose. The one real knock on Dariush is he has a tendency to get rocked on the feet.

That tendency is something that Holtzman will look to take advantage of. He will look to press the action and use his solid boxing skills to win a stand up fight with Dariush.

Holtzman looked really good back in February in his fight with Jim Miller winning by unanimous decision. Holtzman has some good pop in his shots and he’s got decent wrestling as well.

The problem for Holtzman is that I’m just not sure he’s better at anything over Dariush. I think at some point late in the fight, the two are going to end up on the mat, and I think Dariush is going to pick up his fifth straight victory.

The month of August is the month of the heavyweights for the UFC. This is our official tuneup for next week’s Stipe-DC 3 title fight. There are very solid fights up and down the card, and I expect to see some solid action overall.