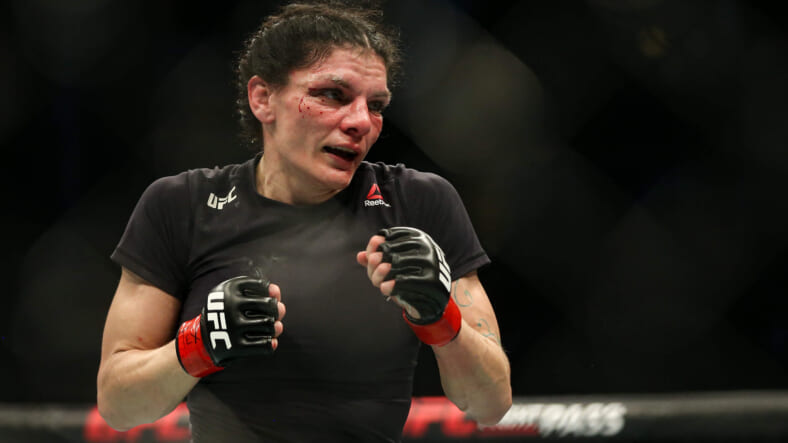 This past weekend at UFC 255, Katlyn Chookagian (15-4) was able to get back on the winning side of things. She was very impressive in her unanimous decision victory over top contender, Cynthia Calvillo (9-2-1).

Chookagian had just fought about a month ago on Fight Island. She was stopped in the first round by former UFC strawweight champion, Jessica Andrade. Despite being stopped, Chookagian still entered UFC 255 as the second ranked contender at flyweight.

The result was a dominant 30-27 victory for the former title challenger. After the fight was over, Chookagian made it clear that she believes anyone who wants a title shot must go through her first to get it. She also called a potential opponent easy money.

“Obviously, anyone that wants to fight Valentina probably has to fight me first. Iâ€™ve already beaten Lauren Murphy, but Iâ€™ll do it again. Itâ€™s an easy paycheck, so whatever,” Chookagian told the media at the post-fight press conference.

Will the UFC book the rematch?

In all honesty, this is the fight that makes the most sense for the UFC. I believe the best fight they can make right now is Chookagian against Lauren Murphy (14-4). Murphy has won four in a row on her way to being ranked fifth in the flyweight division.

The two previously fought back in 2016 and Chookagian won the fight by unanimous decision. Obviously, both of the fighters have improved since their first fight over four years ago.

Murphy was really pushing for a title shot after her last fight, but that was always a long shot. While she had wins over ranked contenders, nobody was near the very top of the division. A win over Chookagian would solidify her status as a top contender.

Chookagian is trying to get another shot at UFC gold. To do that, she’s going to need to string together another win or two. That could start with a victory over Murphy which would give her two straight victories over top five contenders.