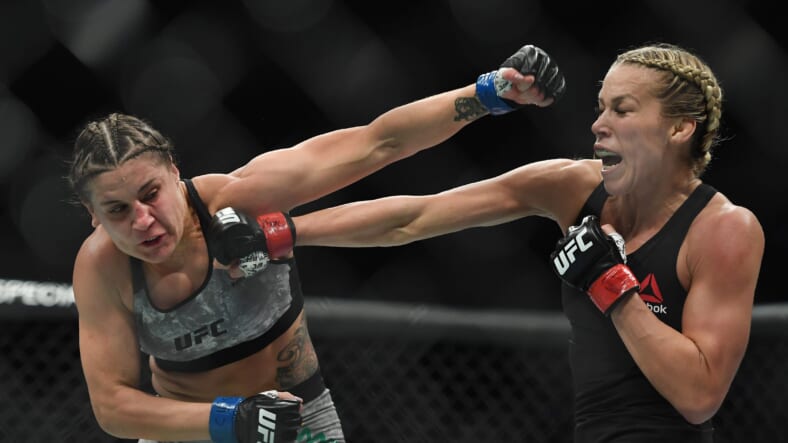 The second fight on the UFC 255 main card was a showdown between two top five flyweights. Former title challenger, Katlyn Chookagian (14-4), was looking to bounce back against rising contender, Cynthia Calvillo (9-1-1).

Calvillo was making her second appearance in the UFC‘s flyweight division. After struggling with weight cuts in her strawweight days, Calvillo was forced to move up to flyweight. She defeated the previously top ranked Jessica Eye in her flyweight debut.

Chookagian was looking to bounce back after getting stopped in the first round in her last fight. Katlyn Chookagian lost to former UFC strawweight champion, Jessica Andrade in her last outing. She was looking to get right back into the title picture with a win tonight.

As the first round got underway in this UFC flyweight contest, Calvillo opened with a low kick. Chookagian tried to land some shots from range, but Calvillo landed a couple of good counter shots. Calvillo landed a nice left hook and transitioned to a takedown.

As the second round opened up, Chookagian continued to stalk Calvillo. Calvillo landed two really good side kicks to the body in the opening minute of the round. However, she was really struggling to get inside on Katlyn Chookagian.

The former UFC title challenger was enjoying a lot of success from the outside. Every time Calvillo started to press forward, Chookagian would pop her with a couple of shots. Calvillo appeared to look incredibly frustrated in the second round.

However, Calvillo landed two massive left hooks with about two minutes left in the round. But neither shot seemed to do a ton of damage to Chookagian. After those two shots, Chookagian went right back to popping Calvillo. Good moments for Calvillo but another round for Chookagian.

As the final round of this UFC 255 flyweight contest got underway, Calvillo tried to push forward. However, Chookagian continued to tag her from the outside. Calvillo started to throw more kicks since she couldn’t get on the inside.

Chookagian just looked a step ahead of Cynthia Calvillo. Calvillo tried a couple of blitzes in the first couple of minutes, but nothing landed. Instead, Chookagian continued to pop her with straight shots. Chookagian landed a crisp counter left hook halfway through the round.

I will say that this was the best round striking for Calvillo. She was being much more active with her kicks, but she was still getting outstruck overall. As the fight entered the final minute, Chookagian continued to land from the outside.

Calvillo tried for a takedown late, but she wasn’t able to get it. She landed a really good 1-2, but Chookagian was able to counter her with a few nice shots. Great performance at UFC 255 for Katlyn Chookagian.