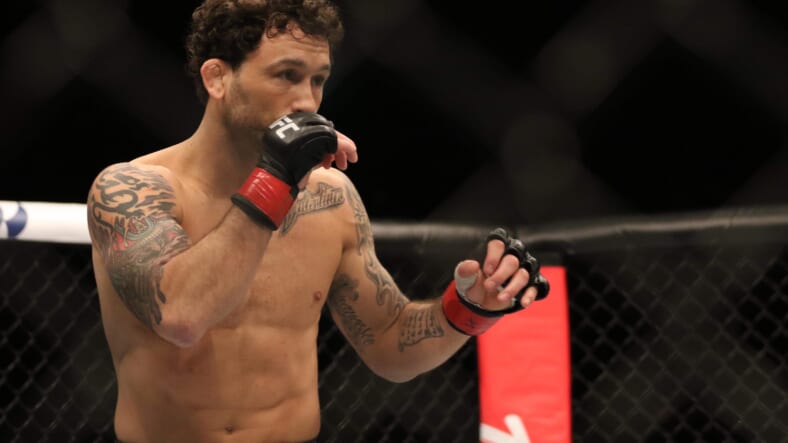 This past weekend at UFC Fight Island 5, Cory Sandhagen (13-2) had a huge victory over Marlon Moraes (23-7-1). After the fight was over, one of the names that Sandhagen mentioned he’d be interested in fighting was Frankie Edgar (24-8-1).

Edgar is currently ranked fifth in the UFC‘s bantamweight division after successfully making his debut against Pedro Munhoz earlier this year. Edgar is trying to work his way up another division for another UFC title opportunity.

While Sandhagen mentioned his name, it doesn’t seem like a matchup the UFC will move to book. Instead, there was another potential matchup that pundits were mentioning that is extremely intriguing for Frankie Edgar. That’s a matchup with former UFC champion, Dominick Cruz (22-3).

While Cruz has been very inactive over the last few years due to injuries, he’s healthy now. He just fought back in May where he lost his title match to Henry Cejudo back at UFC 249. A matchup between the two could serve as a legend vs legend scenario.

Would the UFC make the fight?

A win for either man would put them squarely in the mix for another title shot. However, I’m not sure it would be a fight that Frankie Edgar would be interested in right now. Cruz has been so inactive, that Edgar might be looking for more of a stable opponent in the division.

That being said, it is the fight that I would move to make. I think the UFC would be better off giving Cory Sandhagen the returning TJ Dillashaw. I think the fans would love to see the potential matchup between former UFC champions Dominick Cruz and Frankie Edgar.