TJ Dillashaw’s UFC return is upon us 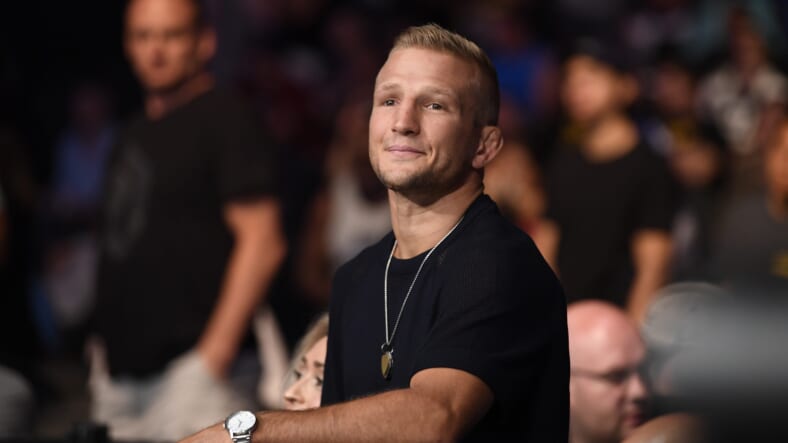 The former two time UFC bantamweight champion is getting ready to make his return to the octagon. In about three months, the suspension will be lifted from TJ Dillashaw (16-4) and he will once again be allowed to compete in the UFC.

A couple of years ago, Dillashaw was riding an incredible wave in the UFC. He had regained his bantamweight title by knocking out Cody Garbrandt, then he knocked Garbrandt out again in the rematch that took place at UFC 227.

Following that, Dillashaw attempted to do something that only Conor McGregor, Daniel Cormier, and Amanda Nunes had done. Dillashaw wanted to become a two division champion and hold both belts at the same time.

Dillashaw’s task was to take out the UFC‘s flyweight king, Henry Cejudo. TJ Dillashaw appeared to nearly kill himself making the flyweight limit, but he successfully made it and the fight was on. However, the fight ended in just 32 seconds after Cejudo connected with a shot and put Dillashaw down.

Dillashaw protested the stoppage and wanted to run things back. The UFC seemed interested in the rematch as well. Then out of no where, Dillashaw announced that he was relinquishing his bantamweight title due to a positive drug test.

Long road back to UFC glory

Later, it came out that Dillashaw had popped for EPO. A performance enhancing drug that specifically aides in your energy levels. Dillashaw said he was struggling to maintain energy while trying to cut down to the flyweight limit. Dillashaw was suspended for two years.

Since then, Dillashaw has used the time away from the UFC to get his body right. He had a couple of shoulder surgeries to repair some damage that had been lingering for some time. Now, he feels like he is better than ever ahead of next UFC run.

However, if he can never return to his past form, people will always wonder if it was just the PEDs that aided Dillashaw. Granted, he never had failed a test, but popping for EPO after rumors had circulated for some time about Dillashaw isn’t a good look. Dillashaw is expected to return in early 2021 to the UFC.