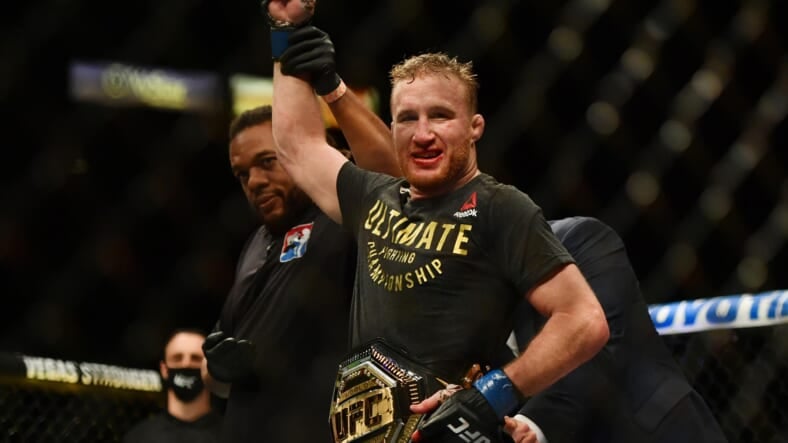 Ever since UFC 258 concluded, the lightweight division has been in the news non-stop. We have fighters calling each other out and some fighters saying others are not worthy of certain fights. Several potential matchups materializing in front of our eyes.

At UFC 258, Dustin Poirier (27-6, 1 NC) knocked out Conor McGregor (22-5) and proved to the world that he’s the best lightweight not named Khabib Nurmagomedov (29-0). Khabib is the current lightweight champion, although he’s maintained that he’s been retired since UFC 254.

Before Poirier knocked out McGregor, Michael Chandler (22-5) made his debut with the UFC in the co-main event. Chandler knocked out Dan Hooker (20-10) with a massive left hook and a few follow up shots.

While all of this is unfolding, the former interim UFC lightweight champion, Justin Gaethje (22-3), has been sitting back waiting for his next move. Gaethje said the UFC attempted to call him before the PPV, but he wanted to see how things shook out.

Back in October, Gaethje failed in his attempt to become UFC lightweight champion. He as choked out by Khabib, but despite the loss, he remains the second ranked contender in the lightweight division.

Before UFC 258, Dana White had said that the promotion was going to work on Gaethje – Charles Oliveira (30-8, 1 NC). However, that fight has not materialized and Oliveira has turned down fights since then due to his desire to fight for the title.Â

Last week, Gaethje said that he would ‘Smoke‘ Nate Diaz (20-12) if the UFC would give him that opportunity. Of course, he’s also talked about his desire to fight Conor McGregor. However, Gaethje has maintained that McGregor doesn’t want to fight him.

There does seem to be one perfect match for Gaethje and that is Michael Chandler. Gaethje said he respects Chandler but finds him cringey and Chandler told ESPN this week that he believes that him and Gaethje are on a collision course. A fight between the two men could materialize quickly.

Yesterday, Gaethje’s manager told ESPN that Gaethje is very much open to fighting Michael Chandler. It seems like the perfect fight to make for the UFC is pairing up Chandler and Justin Gaethje. Both men want the fight and it would create some much needed clarity at 155.