UFC attempted to make Chandler – Oliveira; Oliveira turned it down 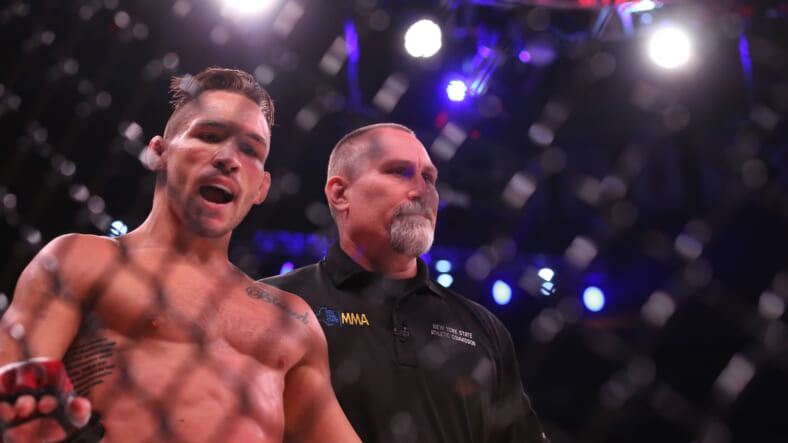 The UFC lightweight division is in a very unique spot at the moment. It’s the most exciting division in the promotion, however, there is a lot of cloudiness surrounding the top of the division. Khabib Nurmagomedov (29-0) has said he’s retired, yet he’s still the UFC champion.

Back at UFC 257, Dustin Poirier (27-6, 1 NC) knocked out Conor McGregor (22-5) in the main event. In retrospect, that fight should have been for the vacant lightweight title with the assumption that Khabib is staying retired.

In the co-main event of the evening, Michael Chandler (22-5) knocked out Dan Hooker (20-10) in the first round. The win was a huge statement in the UFC debut of Michael Chandler. Chandler had spent virtually his entire career with Bellator to that point.

After the fights, Dana White said that the UFC was going to have to figure out what to do with the division. Obviously, Dustin Poirier would be fighting for the title next, but the promotion didn’t know who that would be against.

Poirier only seemed interested in McGregor, Nate Diaz (20-12), or Charles Oliveira (30-8, 1 NC). Meanwhile, Dana White seemed more interested in having Chandler fight Poirier for the lightweight title. This is an idea that Poirier was not a fan of because he felt Chandler hadn’t earned a shot in the UFC.

Last week we learned that the co-main event of UFC 258 between Chris Weidman and Uriah Hall fell through. Also around the same time, Michael Chandler posted on his Instagram that he was Dana White’s new “Yes Man” which left people wondering what was going on.

Well, according to a report from AG Fight, Chandler was offered the co-main event slot at UFC 258. His opponent would have been none other than Charles Oliveira. This goes along with what Chandler told ESPN’s Ariel Helwani this week.

This is a matchup that would’ve provided a great deal of clarity in the lightweight division. However, Oliveira turned down the fight according to the report citing his desire to fight for the title next.

Granted, there might have been other reasons behind the decision, but nevertheless, Oliveira turned down the fight with Michael Chandler. If he couldn’t get ready in time, I completely understand. However, if this was a move out of principle, I really don’t agree with the move.

Charles Oliveira’s eight-fight win streak is incredible. It’s enough to warrant a title shot, however, as I put in my article yesterday, the UFC is not going to give him the next shot. At least, I would be extremely surprised if they do.

That said, this could have been a golden chance for Oliveira to force their hand. Had Oliveira fought and defeated the new company man, the UFC would have nothing left other than offering him a title shot. Time will tell if this was a smart decision or not, but as of now, I really don’t agree with it.